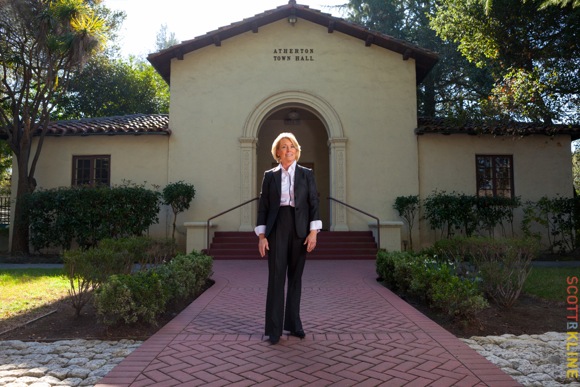 Mayor Elizabeth Lewis has lived in Atherton since 1998 (when she and husband Joe bought a 1926 house that they’ve since restored) but has been a Peninsula resident longer. She moved from Cincinatti to Palo Alto as a teenager when her father, who worked for American Express, was transferred. She stayed local, attending San Jose State, and worked for Cornish and Carey in commercial real estate sales and leasing. While Joe continues in that profession, as owner/President of Orchard Commercial, she says she’s fortunate that she no longer needs to go into the office but can instead “devote 100% of my time to public service.” We talked to Elizabeth recently in one of the Atherton Town Hall conference rooms.

InMenlo: When did you become active in the community?

Elizabeth: When I was living in Palo Alto during the 1980s and my daughter was attending school there, I got active on the Committee For Better Schools. The city was threatening to close down some schools, and the Committee helped get three new school board members elected. I went on to get involved with some mental health organizations. I’ve felt blessed that success in my professional career has allowed me to give back.

InMenlo: What prompted your continued involvement after you moved to Atherton?

Elizabeth: When we started remodeling our house, I became aware of how rundown the Town Center was. The building permit office is still located in temporary trailers.

I got involved in the campaign to renew the Atherton parcel tax, walking door to door. The parcel tax goes directly to support town services. Every four years it needs to be renewed by a two-thirds majority. That gave me a taste of Atherton activism.

Then, a neighbor invited me to be on the General Plan, and then I was on Environmental Programs. Those two committees got my feet wet as far as the workings of Atherton governance.

InMenlo: Serving on committees is different than seeking elected office. What prompted you to run for City Council?

Elizabeth: I ended up running twice in 2008. The first time because there was an opportunity to fill out a three-year remaining term of a Council Member who had resigned. For awhile, it looked like the Council was just going to appoint someone, and I was encouraged by some residents to run. I lost.

But, in November there was a general election with two open seats, and I won one. When I look back on that year, I realize I was campaigning from February to November.

InMenlo: What is satisfying about being in elective office, of serving on the City Council?

Elizabeth:  I think satisfaction comes from the fact that Atherton is such a unique community. This is the second richest zip code, but we really have all walks of life. Through my involvement, I’ve enjoyed getting to meet the people and gaining an understanding about their needs.

There’ll be more satisfaction if we can come together as a group, put aside personal agendas, looks at the issues, and come to a compromise. We have a golden opportunity to come together to rebuild this Town Center, but the only way we’re going to be able to do it is through private donations.

InMenlo: Any fun facts about Atherton that people might not know?

Elizabeth: There are nine schools within the town limits, and when school is in session, our population doubles!