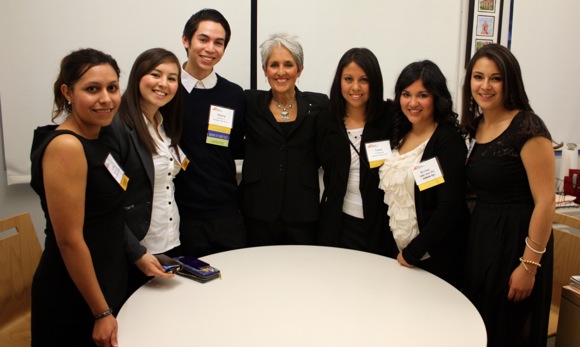 Emailed PCF Executive Director Catherine Foster: “We were thrilled by the overwhelming show of support from the community for The Peninsula College Fund. Almost 600 people attended the concert, allowing us to expand our college success training programs, offer stipends to 10 scholars pursuing meaningful unpaid summer internships, and fund scholarships for half of our incoming freshman class.

“With the increased visibility we gained from the concert, we are hoping to add new members to our Sustaining Scholarship Circle, composed of community members, corporations, and groups of friends or colleagues who commit to funding a scholarship for a student for all four years of college.  We are half-way toward our goal of Circle members for this year.

“Listening to a legend like Joan Baez dedicate a song to one of our graduates was a powerful and inspiring moment for all of our scholars.”