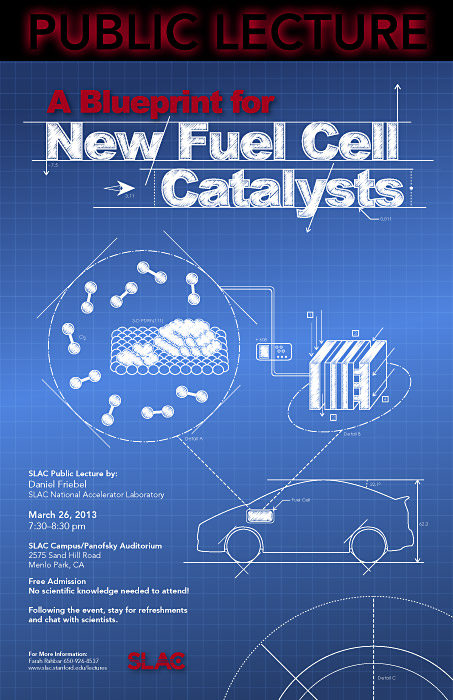 The next SLAC public lecture is titled A Blueprint for New Fuel Cell Catalysts given by Daniel Friebel on Tuesday, March 26 at 7:30 pm at Panofsky Auditorium

Glaciers are shrinking, gas prices are rising – so is our energy-hungry way of life doomed? We believe, no. Every day our sun provides us with more than enough energy, if only we can catch it and make it available. For cars of the future, fuel cells will be an essential part of the story, since they can generate electricity for super-efficient motors from clean fuels such as hydrogen or methanol. Current fuel cells must be improved, since they need too much of an expensive platinum catalyst to split oxygen molecules to burn the fuel.

SLAC scientist Daniel Friebel has been shining brilliant X-rays from SLAC’s Stanford Synchrotron Radiation Lightsource at platinum surfaces to understand their interaction with oxygen. He will explain how bond-breaking and bond-making in chemical reactions are facilitated by catalysts and how X-ray spectroscopy can probe these chemical processes. His experiments, together with quantum chemistry computations done at the SUNCAT Center for Interface Science and Catalysis, were used to create a blueprint for a new, highly active fuel cell catalyst that uses very small amounts of platinum in special atomic configurations.

Daniel Friebel began his research career with a PhD in Chemistry at Bonn University in Germany where he used scanning tunneling microscopy to visualize how atoms arrange at solid/liquid interfaces. In 2007, a postdoctoral research fellowship from Alexander von Humboldt Foundation brought him to Anders Nilsons Surface Science and X-ray Spectroscopy Group at SLAC, and he became Associate Staff Scientist in 2012. His research focuses on using x-ray spectroscopy and scattering techniques to obtain fundamental understanding of atomic-scale interactions during catalytic reactions for clean energy production.