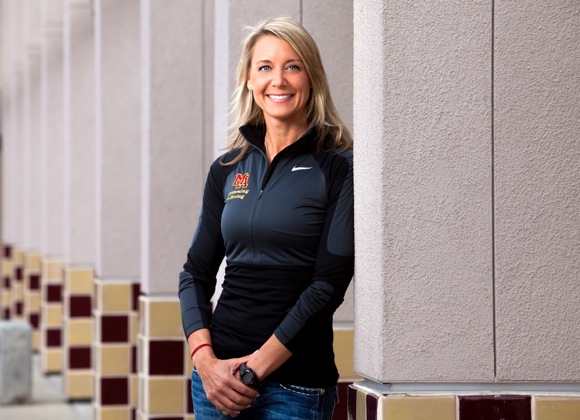 In December, Lori Stenstrom was named girls and boys swim coach at Menlo-Atherton High School. While at Stanford, Lori was a 17-time All American and NCAA Champion. She also was a member of the USA National Team for seven years, medaling for the United States in the Pan Pacific, Pan American and World University Games.

Since retiring from competitive swimming, Lori has co-founded and worked as the COO of two non-profit organizations. She’s also coached swimming locally at Palo Alto Stanford Aquatics (PASA), the fourth-ranked USA Swimming club program in the country. We caught up with her poolside at M-A.

InMenlo: It sounds like swimming has always been a part of your life. How has your participation in competitive swimming affected you out of the water?

Lori: I’m a big fan of what swimming brings to you as person — self-discipline, team work, character building. These lessons shaped who I am and has affected how I raise my kids. They can apply the same principles to how they apply themselves at school. I encourage them to dream big, and that’s thanks to my experience swimming competitively.

InMenlo: How much are you actually in the water today? Do you still work out?

Lori: I work out on a regular basis. but only swim a couple of times a week. When I do, it’s at the warm pool at Burgess for about 45 minutes, swimming all strokes.

InMenlo: This is your first experience coaching high school swimming, correct? How does it differ from coaching club teams?

Lori: First of all, I have a daughter here at M-A now, and we’ve raised our kids in Menlo Park for the past 14 years. But also, I’m a big believer in giving back to the community. When the opportunity presented itself to take on a high school team, I thought about how God has given me a gift and how much I love sharing it with young people. Helping teenagers navigate there way through life is my favorite thing about coaching.

InMenlo: What’s the make up of  your teams?

Lori: I have about 80 kids, split pretty much 50/50 down the middle between boys and girls. We started practice a full month before the season began in early March.

InMenlo: Do you have specific goals for the teams this year ?

Lori: I have really big plans for these kids, which to me, means helping athletes take their talents to the next level. M-A has rich history of aquatic success, and I want to add to it.

On a more personal note, M-A grad and swimmer Mary Edwards was my roommate at Stanford. My daughter Brooke was a flower girl in her wedding. Now Brooke is here swimming and has her sights sent on breaking Mary’s records!

InMenlo: What are the challenges/opportunities of coaching both boy’s and girl’s high school teams?