Then and now: The changing face of downtown Menlo Park 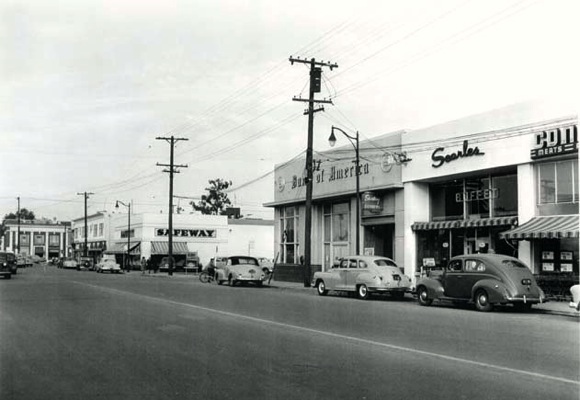 You can’t deny that there has been a dramatic change in the appearance of downtown Menlo Park over the past 65 years.

The black and white photo (above) is from about 1950, taken near the corner of Santa Cruz Avenue and Doyle Street. Bank of America came to Menlo Park in 1937. Its first location was in the still-existing building at 1165 El Camino Real where the Academy of Dance Studio is now. Note in the photo the parking off of Doyle Street beside Safeway, also the lack of parking restrictions on Santa Cruz Avenue. 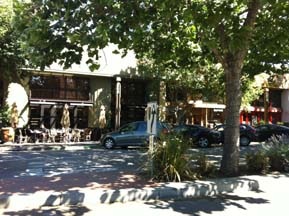 The color photo, taken in the summer of 2012, illustrates the effect of the trees planted in the middle of Santa Cruz Avenue. After Bank of America moved into a new building across Doyle at 633 Santa Cruz Avenue, their old building at 634 was converted into the Menlo Theater. Searles became Yuen Yung Chinese Restaurant, which eventually expanded into the theater building after gutting and rebuilding it. Following the demise of Yuen Yung, Left Bank established itself on the corner, Harvest acquired the Searles space, while the Consumers Market space is now Bistro Vida.

Polk’s City Directory has the address for the bank as 633 Santa Cruz Avenue even when it was on the SW side of Doyle Street and when at that same time Safeway was at 611 Santa Cruz Avenue. In it’s present location, on the NE side of Doyle, the bank is still 633 Santa Cruz, while Left Bank, which now occupies the SW side of Doyle, is 635 (not 634, an error in my posting above). My speculation is that the bank didn’t want to have it’s mailing address changed when it move only a few feet away, so maybe they got approval from the City and the U.S.P.S. to keep their old number. Maybe there is a reader who knows what really happened?