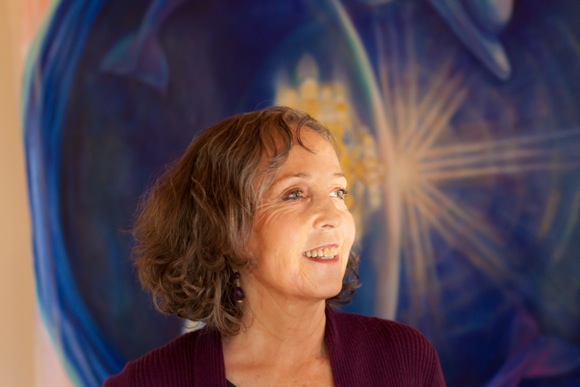 “This has always been a base for me and I don’t really know why,” she said at a friend’s house where she’s staying. “New things start here for me. I always wanted to live more in Palo Alto but always find myself here in Menlo.

The lure of Menlo has lasted decades for the artist: “I think the Peet’s on Santa Cruz in downtown is the fourth one to open. During the 80s, I used to go there to socialize on Saturdays. It was my favorite hangout because there was always something happening.”

Chrisann describes her artworks as “light encoded paintings.” “I took fine arts,” she said. “Gordon Holler was an influential teacher at Foothill College. In the late 80s, I went on to attend California College of Art and then San Francisco Art Institute but nobody was like Holler.

“Given my training, there was no way I would have gone into new age art, but I did. It took me a year to get over my embarrassment!”

Earlier, Chrisann painted murals for health care facilities including Ronald McDonald House and Packard Children’s Hospital and did visualized information for businesses that she refers to as “corporate graffiti that I couldn’t believe they were paying me for.”

“My murals were made from huge stencils that I made to look like Japanese woodcuts,” she said.  “Along the way, I discovered the Goethe’s color wheel. After that, I started doing sacred painting.

“Painting is a language for me. Letters are form, and paintings are documents for information. When I mix those two, I’m happy. It gets me out of the normal way, which is what I want to do.”

Chrisann does mainly commission work for individuals and businesses, but she talked about a non-commissioned painting hanging in her friend’s Menlo Park home that she did while living in Paris for a year: “I call it Sunrise on Venus. It’s about male and female balance. And people/God’s presence. It’s about identity.”

Much like her surprise at the direction her art has taken, Chrisann said she’s also surprised to find that she’s written a book, a memoir about her relationship with Apple founder Steve Jobs, who is the father of her daughter, Lisa Brennan-Jobs, which will be published this fall by St. Martin’s Press.

Editor’s update: the book is The Bite in the Apple: A Memoir of my Life with Steve Jobs.

I have read many articles about Chrisann Brennan but have yet to find even one of her paintings or other art work on-line. I am very interested in seeing her paintings, as I myself painted abstracts in college. How can I view her work anywhere?