With her first novel, Katie Mishra takes us inside the world of “GUKs”, published at age 12 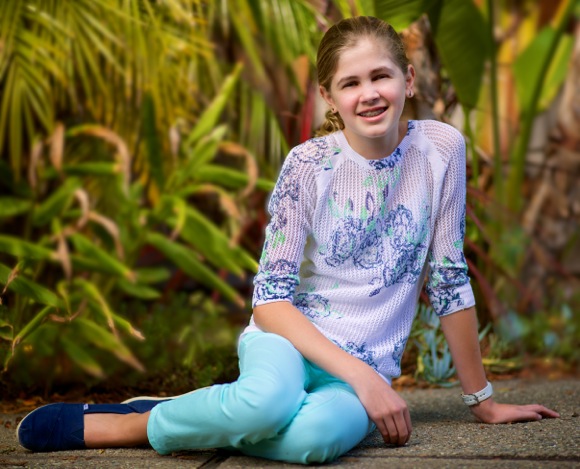 The first thing we needed to clear up when we visited 12-year-old Katie Mishra was the meaning of “GUK”, a key term in her recently-published first novel.

“I’m a GUK and so is the book’s heroine, Becka Donovan,” she explained. “We’re grown up kids (GUK), no longer children but not yet teenagers. Becka is based on me, and all the other characters are based on friends and family.”

Katie’s book, The Gucky Tales: The Quest for the Golden Quarter, was published just after the first of the year, the culmination of a journey that began when she was a 5th grader at Oak Knoll School. “Kepler’s had a ‘pitchapalooza’ where aspiring authors came and pitched book ideas to publishers,” she said. “I was the only kid and got an honorable mention.”

That got the attention of The Book Doctors who helped Katie get started: “They came to my house in the summer of 2011 and helped with the first chapter. They also helped me find editors and offered support.”

Katie found writing the first part of the book “fun” but acknowledges that things got tougher later in the process, especially during the final editing. “That was my least favorite part,” she said.

She doesn’t think she’s going to write another book in the near future, although she’s still writing, currently working on a fantasy story with some friends. About her experience from 5th grader-with-an-idea to published author at age 12,  she said: “I think it’s given me a better perspective of what I can do when I set my mind it.”

Footnote: Katie’s mom, Stephanie, gave a shout out to Create Space, which was the self-publisher they selected. “As a parent, I’d recommend that for any kid who likes to write and has enough to fill up the pages of a book, they get a ‘real’ book, which you can do through Create Space. It’s a fairly easy process to upload and I hope more kids and their families take advantage of it.

The Gucky Tales: The Quest for the Golden Quarter is available at Kepler’s and online via Amazon.

The title is Gukky Tales: The Quest for the Golden Quarter