There with Care, an organization that provides 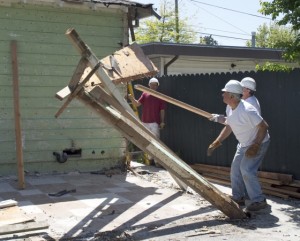 With the goal of making service simple, Menlo Park Presbyterian Church and its Open Door Church campuses invite the public to join in serving in 33 projects on Saturday, April 27 and Sunday, April 28  — its eighth annual Compassion Weekend.

Instead of regular worship services that weekend, congregants participate in service projects throughout the Peninsula. In 2012, there were 3,900 volunteers. This year, 4,600 people are projected to volunteer. Compassion Weekend is funded by MPPC’s Christmas offering which raised over $510,000 that will go directly out into the community. More information, including how to volunteer, is available online.

Compassion Weekend was created in an effort to engage the church in acts of service in its local community. “Our communities face significant obstacles and challenges, whether in education, healthcare, homelessness, or even human trafficking,” says Mark Swarner, Menlo Park Presbyterian Church Mission Pastor.  “We believe the church can and should make a difference in our community in visible ways.

“One of the most significant reasons we keep doing Compassion Weekend is that after doing it year-after-year, relationships have been built with people in the community, mission partners, and agencies, and they all look forward to us coming out on Compassion Weekend, and want us to keep doing it.”

The 33 projects represent the church’s key focus areas, education, poverty and human trafficking, many of which are suitable for families and children. The projects, which are open to the public, are based throughout the Peninsula and stretch to San Francisco, San Jose and Fremont. New projects this year include a project with Freedom House, a rehabilitation facility in San Jose for human trafficking victims under the age of eighteen, and a facility upgrade of the Project WeHOPE Homeless Shelter in East Palo Alto. Menlo Park-based projects include two at the Ravenswood School District and a new project with the assistance and supplies to families whose children are critically ill.