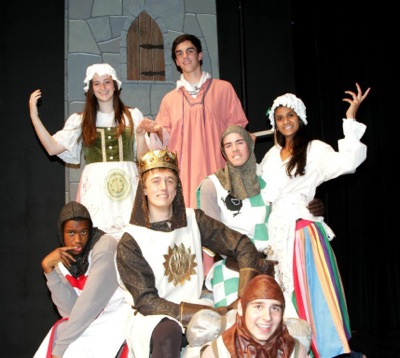 Menlo Upper School’s drama department presents Spamalot as its annual Outdoor Spring Musical this year. Performances are scheduled for May 3, May 4, May 5, May 10 and May 11, all starting at 8:00 pm — students $8, adults $10. Dress warmly, bring blankets, picnics and low lawn chairs.

More than50 Upper School Menlo students comprise the cast and crew for this hilarious Broadway hit musical, “lovingly ripped off from the classic film comedy Monty Python and the Holy Grail.” Come see live and onstage the killer rabbit, the flying cow, the Knights of Ni and the antics of King Arthur, Guinevere and The Knights of the Round Table.

“This is purely comical insanity!” said Elizabeth Orr, Menlo’s Drama teacher and the Director of the show.  “We’ve been having a lot of fun rehearsing it, even though the audience will never know how much work the cast and crew put in to learn all of the songs and dances, set up the stage and lights, gather the props and costumes.”

Senior Ryan Bowman who plays Arthur said, “We’ve been waiting to do Spamalot since before we were in High School!”

Great article! Spamalot is one of my favorites of Monty Python.