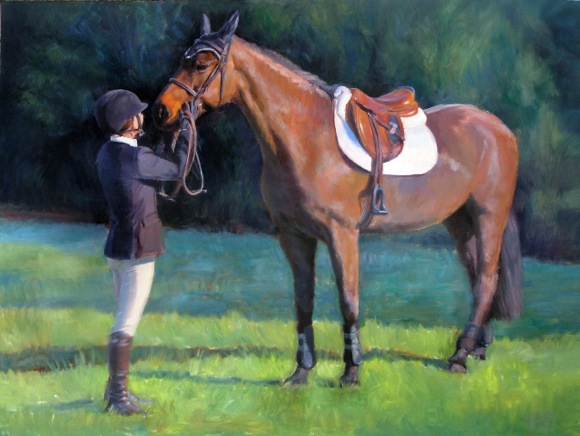 The Menlo Charity Horse Show Committee announced that San Carlos resident Stacey Turcotte is “Artist of the Year” for its upcoming show, August 6-11, 2013 at the Menlo Circus Club in Atherton. Each year the committee selects an artist and painting that represents the Show’s spirit of the competition demonstrated over the past 43 years.

“Stacey’s painting We Can Do This is a touching piece that captures a moment of unspoken connection between horse and rider before competition,” said show spokeswoman Carissa Ashman. “The painting resonated right away with the committee and it was a clear winner,”

The painting will be auctioned at a pre-Show gala on Friday, August 9th. All proceeds will benefit Vista Center for the Blind and Visually Impaired which is dedicated to serving over 2,000 clients in the Bay Area through its programs promoting independent living and improving quality of life.

Though Stacey has been painting the last 10 years, she is relatively undiscovered. She decided to “give it a shot” and submit her oil on canvas, We Can Do This into the competition. Show co-chair and founder, Betsy Glikbarg of Atherton said, “We are honored that Stacey Turcotte will be adding her name to the list of extremely talented and well-known artists, such as LeRoy Neiman, who have participated in our event.”

Inspired by animals, Stacey says she paints “in a loose approach with a solid foundation. My driving force is to bring the spirit of the subjects to life. Painting a horse and rider captures the delicate balance of precision and harmony.”

Truly amazing work. This Artist has captured the essence of the relationship between the rider and their horse. Lovely! Cannot wait!