Freewheel Brewing Company,, owned by three Menlo Park residents and a UK-based partner, has not only brought English-style, cask-conditioned ale to the Peninsula, it’s also imported another bit of England, Liverpool-transplant Janet Berkeley, now on duty Monday nights as Quiz Master. We checked in with her to find out just what a Quiz Master does and what players could expect when Janet is firing the questions.

InMenlo: Tell us a little bit about what a quiz master does.

Janet: I make up quizzes that I give mostly at pubs and fundraisers. I pull my information from all over the place. It takes me about 10 hours to put a quiz together

Janet: Mine have about 75 questions. I ask the questions aloud and participants write down their answers.

I have the usual questions about history, sports, music, science, food, but I also try to have a few more esoteric things as well.  I usually start with 10 general knowledge questions, and then I have five slides of famous people, places, art. I like to throw out “anyone’s guess type questions” like “How long is the world’s longest tamale? Or “How many pennies did the dog in New York swallow?” 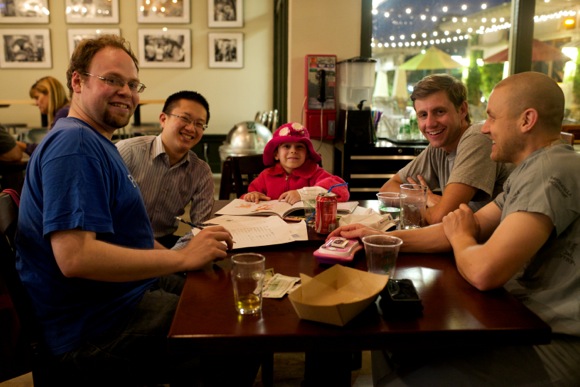 InMenlo: How is the competition structured?

Janet: Mostly people play on teams of four to six people. A few participants at the Brewery are taking the quiz as individuals — I think they are very brave!

InMenlo: What did you do professionally before becoming a Quiz Master?

Janet: I worked in public libraries for about 25 years before getting laid off. I’d been going to trivia competitions for about 14 years and have been  a quiz master for two years. I currently have about two gigs a week but hope to expand.

Triviolity is my new business. It took me 51 years of my life to do what I really love doing!

Photos by Irene Searles (including one Monday night’s winning team)