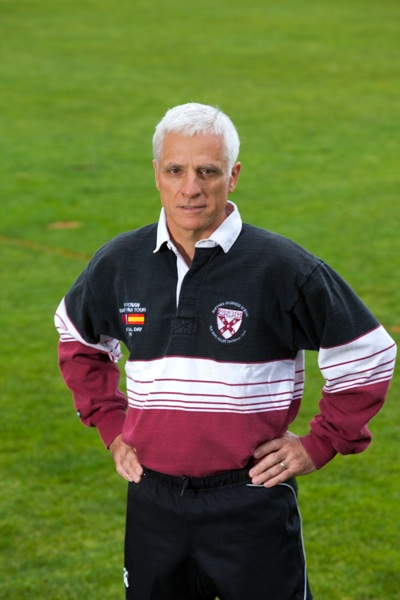 When he played rugby in high school in his native Scotland and later at Cambridge University, Menlo Park resident Iain Watson had no idea what an “old boy” was, let alone that he’d become one, or for that matter still be competing at age 57. But that’s what he’s doing on Saturday (May 18) when the PAXO Old Blacks participate on the Bay Area Senior Games at Stanford’s Steuber Rugby Field.

“I attended Harvard Business School, which has both a team of current students and grads,” he explained. “The Old Boy team has played all over the world and I’ve gone on a lot of the trips. My wife and I were married in Ravello, Italy while on tour with the Old Boys on the Amalfi coast. One of the games we played there and won was against a team from the NATO base in Naples.”

Iain also played in an Old Boys league here in the Bay Area that was active throughout the 90s but then, he said, “kind of fell apart.”

An investor by profession, Iain said he’s always been more of a sprinter than a distance runner, and that was one reason he was attracted to rugby. “I still work out with a trainer one day a week, mainly so I don’t pull a hamstring or something,” he said. “At last year’s senior games, I competed in the 50 and 100 yard dash.” 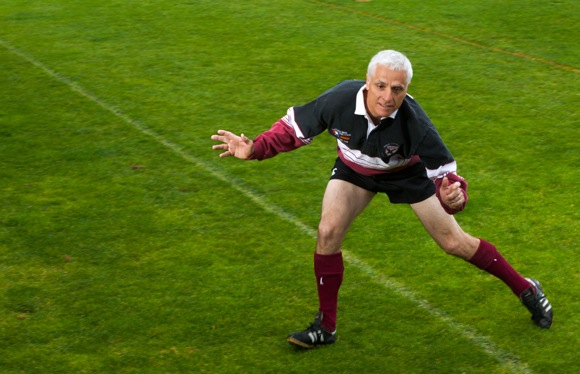 As an Old Boy rugby player, Iain has watched the game evolve as teams have aged: “When the Harvard Old Boys played in Canada 10 years ago, they instituted a new rule that if you were over 50 you could wear red shorts, and guys could touch but not tackle you. Of course, I was a spry 47 then”

Asked how he’s prepared for Saturday’s competition, Iain said he hadn’t other than the weekly sessions with the trainer. “By the time you play in Old Boy’s games you don’t practice, you just show up.”

While this is the first time he’s played rugby for two years, it won’t be the last time he plays this year. “In October, the Harvard Old Boys are celebrating their 50th anniversary,” he said. “We’ll play the current HBS team. In the last 10 years or so, we’ve had to ask them to lighten up a bit. Most of them are in their late 20s.”

Such is the sporting life of an Old Boy.

A schedule of other Bay Area Senior Games event taking place this weekend is available online.

Editor’s note: Iain emailed us after the competition to say that three teams competed, with one team playing two games and the other two teams just one game. The team that played two games, Old Southwest was awarded the medal. “… even though we beat Old Southwest, they had traveled the furthest, the other team being the Bald Eagles who are also local.  All of us on the PAXO Old Blacks thought it was a good gesture, especially as we didn’t play the Bald Eagles, so we don’t know if we would have also won that game, and Old Southwest were definitely less fresh playing their second game of the morning after just a short break. Despite being tired and being down by several tries (like touchdowns), they never gave up and scored a few tries late in our game. That was impressive.

“Rugby is sometimes rough but the game has a strong tradition of sportsmanship. None of us were there for the medals, just the camaraderie of old friends playing a sport we love, knowing full well that we no longer qualify even as weekend warriors, and that there will come a time for each one of us where we will have to hang up our boots for good.”