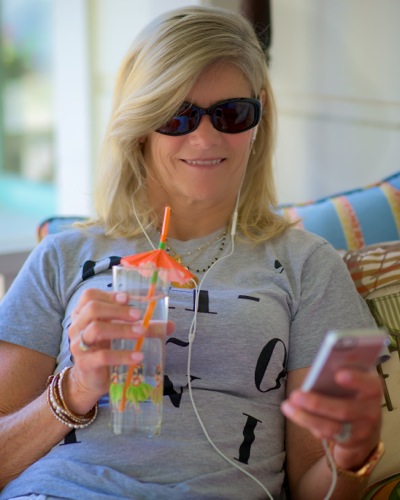 Phoenix. Cage the Elephant. Emperor of the Sun. Young the Giant. Whether these words/names mean anything to you is a good litmus test of your hipness to today’s music scene.

Atherton resident Julie Brody knows them all — and many more.  Since suspending her nursing career to concentrate on parenting, she’s been involved in various philanthropic activities, mainly centered around her four children’s schools, including the Menlo Park Atherton Education Foundation and M-A’s Foundation for the Future. “We went public schools, all the way,” she says, explaining that the last of her offspring graduated from M-A last week.

Julie says she’s loved music since watching the Beatles on Ed Sullivan when she was just a kid. By junior high, she was listening to an eclectic mix that included jazz, thanks to her father’s influence. “My 8th grade nickname was ‘Satch,'” she says.

By the time she entered high school in suburban Chicago, she was seeking a way “to be cool.” Her first concert was at Ravenia to see Janis Joplin, her second was The Rolling Stones. “I was fascinated by Jim Morrison [of The Doors] but also listened to the Beach Boys and Motown. In those days, you bought an album and listened to all the songs.”

When her children came along, Julie started listening to “kiddie music” and wondered if she’d ever be current again. But, she’d hear something she liked every once in a while and then go into a music store, asking, “I love this band. Do you have any music like it?”

As the kids became teenagers, she got into their music. “For three years in a row, one son and I went to a music festival called Summer Camp near Peoria, Ill. There were 10,000 hippie kids — and me.

“My friend Jill Smith and I go to see bands at small clubs in the City. I had to get over the fact that we kind of stick out in the crowd of younger people. But, I really like going to shows and the music, so we go and have a lot of fun.”