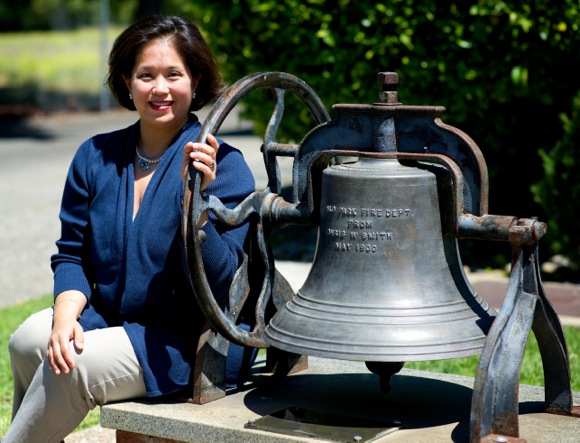 The mission of Menlo Park-based Ring The Bell Fund is to help provide funds for schools to connect monitored fire alarms systems with their associated fire departments as well as to install sprinklers in the schools to maximize safety and minimize property damage. The Fund launched in May with a $20,000 challenge grant from Facebook. We sat down with founder Virginia Chang Kiraly, who is currently a Menlo Park Fire Protection Dictrict director, to learn more about the Fund and her motivations for starting it.

InMenlo: What brought you to Menlo Park?

Virginia: I grew up in Austin, Texas, thinking I would be a concert pianist, switching my major in college to economics. I was at law school in Southern California when I got clerkship with Attorney General, John Van De Camp, which I did instead of finishing school.

I ended up working at various Wall St. firms in the Southland. One moved offices to San Francisco and that’s how I go to the Bay Area.  When I got marriend and started a family, we moved to Menlo Park because it’s a great place to raise a family, just like Austin was.

InMenlo: What prompted you to see elective office – and specifically the Fire Board?

Virgina: I tend to look at things from a macro perspective, and with a background is in finance, I’ve been concerned  about the sustainability of services that our communities need. I’d gotten familiar with the Fire Protection District through some Junior League projects. So that’ part of it.

The other thing is that I was serving hot lunch at my kids schools in 2008 and the fire alarm went out off. Yet there was no response, no one showed up. Because the school didn’t have a monitored a alarm system, it would have required a 911 phone call. I thought, ‘if my school district isn’t connected, how many others aren’t connected either?’ [Note: the school is now connected. Schools in the Menlo Park City School District and Los Lomitas School District are connected.]

InMenlo: You were elected a director of the fire district in Nov., 2011 to a four year term. What have you learned so far?

Virginia: I went in knowing what the issues are, so no surprises there. When you get into a elected position, you sometimes lose sight of who your represent, so I try to go back to the residents, the taxpayers, the voters. When you think like that you makes the best decisions, I’ve found. That’s something I’ve learned is important.

InMenlo: I understand the that Ring the Bell Fund will first concentrate on the Ravenswood School District, but what are specific first year goals?

Virginia: Much of focus will be on fundraising. The cost of aImonitored alarm system is about $200,000 for each school  If you add sprinklers, that can double the price tag. We estimate we’ll need $5 million for the 10 campuses.

100% of what we bring in will go the schools, we have no administrative costs.