That Camperdown Elm at Filoli 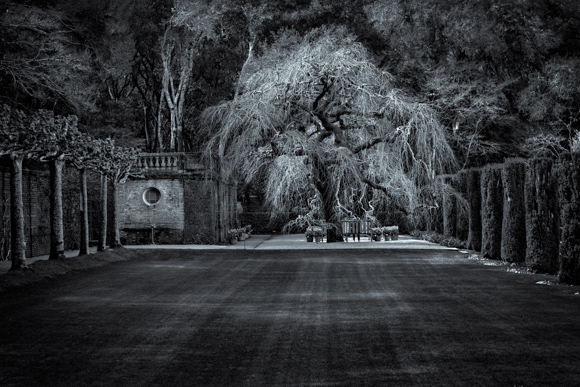 Do you have a favorite tree? Perhaps one in your backyard – or a neighbor’s yard just down the street? Or a favorite oak tree somewhere in Menlo Park or Atherton?

I’ve got mine – at least one of my favorites. It’s a Camperdown Elm at the end of the Bowling Green adjacent to the Pool House at Filoli in Woodside.

I love Filoli – and have been there many times. It’s such a quick trip north from home – and brings the sheer delight of a walk in an amazing garden within minutes. Add in the lovely cafe and it’s just perfect.

Photographers like to photograph their favorite spots early in the morning or near the end of the day – those are the golden light hours. But Filoli’s hours begin at 11 AM and end at 3:30 PM – leaving us mostly with mid-day light for our photographs. But if you get there at opening early in the year – when the sun is still low in the sky, you can find some magical light. And, on Wednesday this week, Filoli held a special day with late hours – closing instead at 7:30 PM. There’s another late closing coming up at Filoli later this summer – Wednesday, August 14. The days will be even shorter then!

Also below is a more recent shot – taken last Wednesday about 5:30 PM in the late afternoon light. The elm is heavy with leaves at this time of year.

Which one do you prefer? 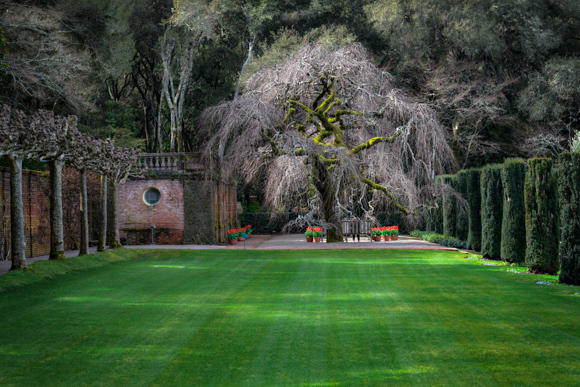 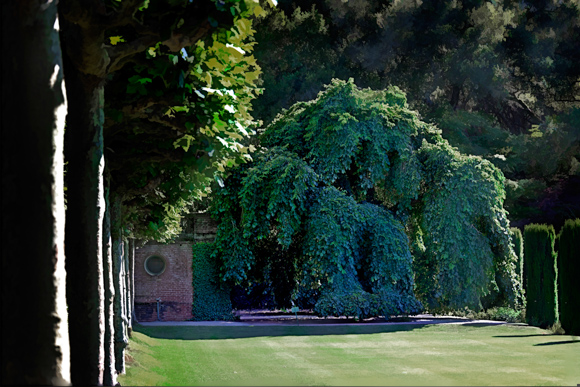 Scott – Your story and photos are so magical. I am enchanted! Wow! I want to race over to Filoli right now to stand in the presence of that tree, but it’s midnight. Actually, I don’t even need to go there. Your photos are so powerful. I feel it. Thank you.

Scott, Love all the photos but I particularly love the black and white one. Love the color one too. Filoli’s Camperdown Elm – that particular one as there is another one behind it – is also my most favorite awesome tree! In fact, I got a Canon 7D for Christmas last year specifically because I would like 4 photos of that tree taken from exactly the same spot you took this one – one in Winter when it is bare like in this photo, one in Spring when it gets those gorgeous light green papery “blossoms” just before it leafs out, one in the Fall when the leaves all turn bright yellow (Filoli is usually closed for the season by this time though), and one in full dress like yours above. Then I want to frame all four in one frame. I had no idea how to use this camera and am not too good at it now but am learning. I have lots of pictures of it but none nearly as good as this one! I am also a volunteer docent at Filoli so I get to see it very early in the morning. By the way, FYI, Filoli opens at 10AM every day except Sunday when it opens at 11AM. The two evening late closings this year are a wonderful opportunity for photographers as well. When they are fully leafed out, I like to imagine that the Roth children and their friends had a great time hiding under that tree and, of course, climbing it. It is quite a gorgeous, interesting tree – thank you for the awesome photo!