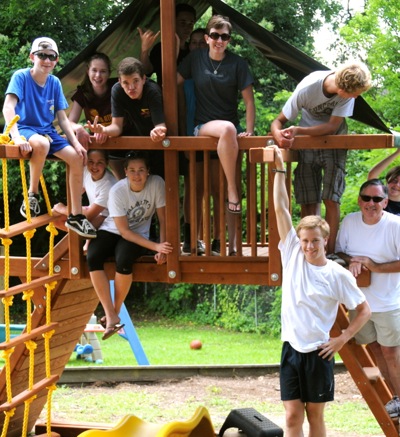 Seventeen youth and adults from Trinity Church in Menlo Park spent five days on a mission trip to Spartanburg, South Carolina, where they facilitated home improvement projects for The Haven, a family shelter. Led by youth minister Cait Black, they worked from June 17 to June 21 building a play structure and painting murals on the interior walls.

The youth were accompanied by Cait’s nieces and nephew, who bonded with the Trinity kids and contributed  to both projects throughout the week.

The Haven, run by director Cindi Goodin, recently moved to a large Victorian house in Spartanburg in order to accommodate more families. However, due to an underfunded budget, the shelter has no money to improve the property.

Before the arrival of the Trinity youth, the only play structure available to the children who live there was a rusty, unstable swing set and slide, which could only be used by kids under age six. The structure team enjoyed installing an industrial-grade play structure with no age or weight limit. The new structure is equipped not only with stronger swings and a larger slide, but also a rock wall, rope climber, two ladders, and a playhouse complete with flags, telescope and steering wheel.

As the structure began taking shape throughout the week, the younger residents began hanging around the yard, shyly watching as their new play structure was assembled. Soon, they were asking questions and helping to test out each new piece as it was added. By the end of the week, they were tossing a football around the structure with Trinity youth, enjoying the presence of new older friends who wanted to hang out with them. 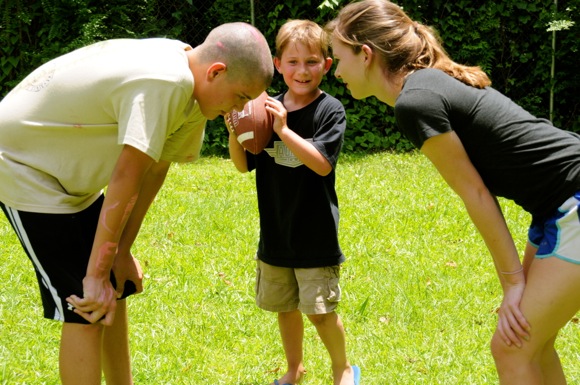 Thus the structure became a source of community building for the house, and as it took fewer and fewer people to actually work on assembly, the group transitioned to talking to the clients, and learning their stories of homelessness and hope.

Inside the house, the other half of the Trinity youth and adults worked to transform three interior walls from institutional-looking, off-white to beautiful orchards. In the first hallway, completed in the first half of the week, Trinity girls painted an apple tree, cherry blossom tree, large oak tree, a hill with The Haven name and slogan underneath, and another tree with inspirational words painted into the branches. 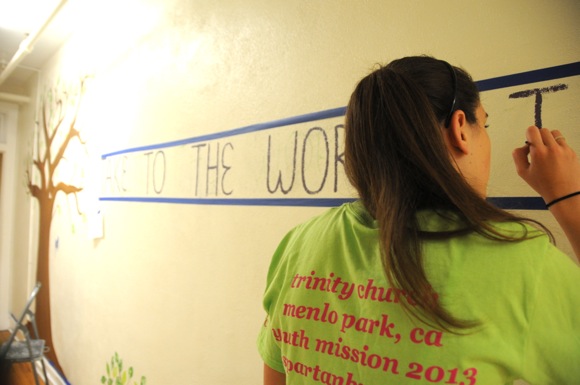 They felt that the words, from a Derek Webb song called Take to the World, embodied the work The Haven does for its clients, and the mindset it encourages as they leave the house after 90 days to go back into the world.

As the murals were being completed, residents continuously made comments with regard to how much brighter the hallways now look, and how much they appreciated the work. 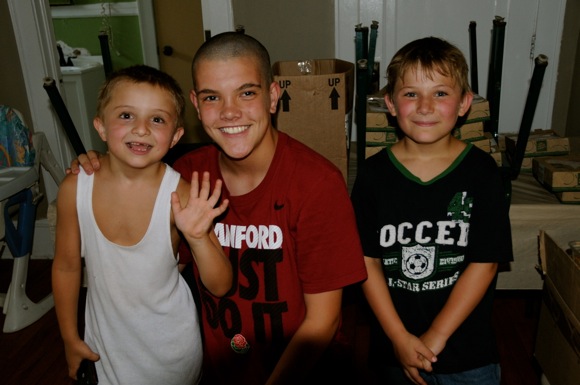 The Trinity youth were hosted by the Episcopal Church of the Advent in Spartanburg, who generously shared their large youth center for the week.

All who travelled to Spartanburg were deeply impacted by the realization of The Haven’s lack of resources. The shelter can accommodate nine families at a time but has had to turn away over 200 in the past year. Additionally, their budget has been so strained this year that they had to cut their only mental health professional from the staff and have barely been able to provide three meals a day to residents.

As a designated 501c.3 non-profit, The Haven relies completely on donations to furnish the house, feed the residents, and pay their staff, and are always in need of help. More information about how you can contribute is available on the organizations’s website.

Author and photographer Annalise Deal will be a senior at Menlo-Atherton High School where she is active in the school digital arts program.