The colony of honeybees that’s lived in an old blue oak tree in front of Building 41 on the SLAC campus in Menlo Park for nearly 50 years has been relocated because the decaying tree must be cut down, for safety’s sake, prior to the building’s renovation.

Beginning in May, San Jose beekeeper Art Hall (pictured above) worked to lure the colony of some 50,000 bees into portable hive boxes. After a few more weeks’ quarantine to be sure the bees are healthy, Hall will give the colony to a local student member of a South Bay Future Farmers of America or 4-H club and will also offer samples to several universities that study feral bee populations and use them in breeding research. According to Hall, bees from the hearty SLAC colony may help researchers in their efforts to deal with colony collapse disorder.

Hall will also extract honey from the comb left inside the tree. If it’s fit for human consumption – free of parasites, mold, etc. – he’ll bottle it and donate some to SLAC.

Hall says the hive’s residents are western honeybees (Apis mellifera), America’s dominant honeybee. “These honeybees are not aggressive. If a hive’s entrance is more than 15 feet up in a tree, you’d never notice the bees,” he said.

One of SLAC’s longest-serving employees, Engineering Physicist Dieter Walz, has admired this particular bee colony since he moved into Building 41 in 1967. He recalled that a large limb had been cut off the blue oak to accommodate Building 41. The wound never healed properly and bees colonized the ensuing cavity. Although the bees were docile, Walz said some employees complained after encountering the insects near the building’s outdoor stairwell.

“On more than one occasion, the cavity was sealed with concrete, which was the preferred method at that time,” Walz said. “Arborists now know that such treatment actually accelerates decay rather than repair. The bees always found another entrance to the cavity and over the decades expanded their hive to occupy the tree’s progressively hollowed core.” 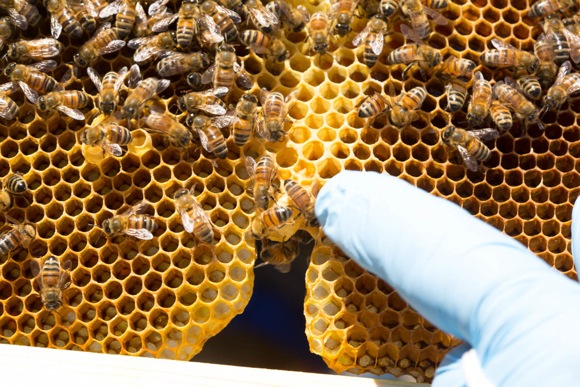 Hall said his original plan was to pull out an old concrete plug and remove the bees directly.

“But when I looked at it, I could see all the way through the trunk,” Hall said. “There was no ‘tree’ inside that tree. I couldn’t open it up to take out the bees for fear of weakening the trunk even further.”

Facilities wrapped a chain around the trunk to keep it from splitting, falling and possibly hurting someone, and Hall turned to what’s called a “trap out” technique. He sealed a one-way pipe into the tree hive’s entrance so bees could exit, but not return. On a low scaffold nearby, he placed two hive boxes containing honeycomb, nectar and a chemical that calms the bees until their queen arrives. Blocked from re-entering their tree hive, worker bees returning each evening should go instead into one of the boxes, Hall said.

The queen cannot survive inside the tree hive without water, which must be brought in from the outside by foraging worker bees.  “At some point the desperately thirsty queen will leave the tree and join her subjects in the box, at which point I take them away,” Hall said.

It turned out that over many years woodpeckers had created numerous holes in the blue oak’s bark. The bees had sealed these holes from the inside with propolis, a waxy germicide they use to cleanse and protect their hive. But with their main entrance blocked, the bees started clearing out the propolis plugs to create new back-door entrances, temporarily foiling Hall’s plan.

Hall filled those back doors with expanding foam, and nearly a month later the queen left the tree hive for one of Hall’s boxes.

The tree was scheduled to  be cut down on Saturday, July 20.

Later this year, Hall will also be removing two other bee colonies located near SLAC buildings. One is in a tree just north of the old fire station (Building 82). The other is a few yards to the west, between the Building 280 parking lot and Loop Road, just north of Building 25.

This article originally appeared in SLAC Today, which includes a video of the bee removal. Used with permission.