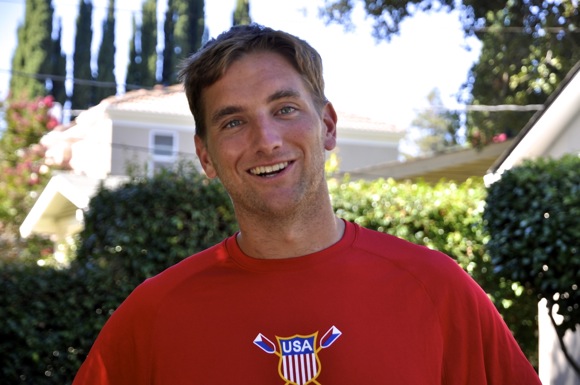 When Seth Weil landed at UC Davis after graduating from Menlo-Atherton High School, he looked for something competitive to do. He discovered rowing, which was a club sport at Davis that competed against colleges where it was a varsity sport. Now, at age 26, he’s returned to Menlo Park an international champion as a member of the U.S. Rowing Team.

The secret to his success? A bit of luck and hard work. “The luck component is that I’m the right size [at 6′ 7 1/2″ inches], and I was surrounded by good people who offered a lot of support,” he said sitting in the living room of his parents’ Menlo Park home where he is visiting before heading back to Princeton, NJ, the home base of the national team.

Seth participated in the Men’s Four, along with Michael Gennaro, Henrik Tumel and Grant James, at the World Rowing Championships recently held in Chunqui, Korea. They’d never trailed in competition this season. 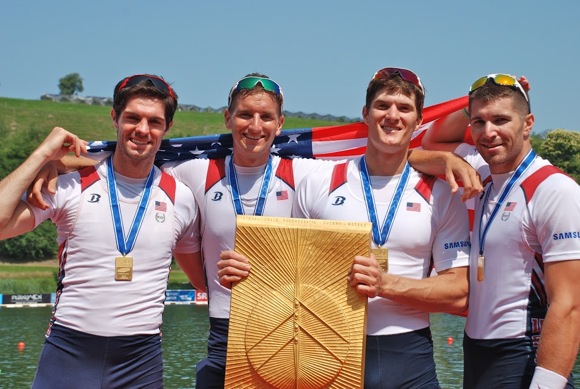 They led from start to finish in the races in Lucerne and won gold (photo above). And they led all the way through their heat and semifinal in Chunqui. But they fell to the back of the pack at the start in the final heat and had to row through the field to get into medal position. In the end, The Netherlands took gold, leaving silver for Australia and bronze for the United States.

The rowing season over, Seth is taking a couple of weeks off before he starts training again, which includes participation in camps and trips. It will be his first full season in Princeton, where he lives with a host family along with a teammate.

He’s glad that his college athletic choice has become an adult pursuit but also enjoys his time off. “Distractions are good,” he said. “For me that means movies and food.”

And, of course, spending time in the city of Menlo Park where he grew up.