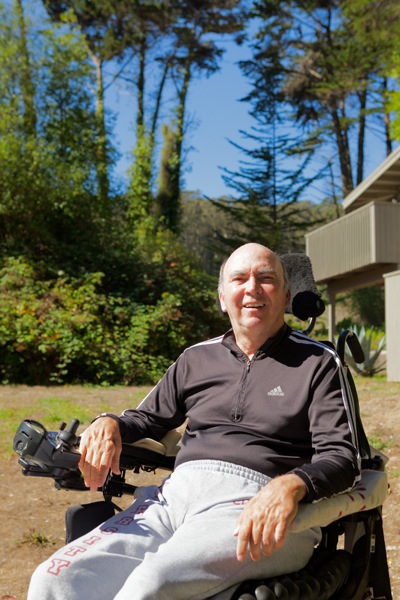 Local residents are in for a double treat on Thursday, Sept. 12. There will be a screening of the multiple-award winning documentary Running for Jim at the Performing Arts Center at Menlo-Atherton High School. And they will be able to hear directly from Jim himself.

In 2010, Jim was diagnosed with amyotrophic lateral sclerosis (ALS), commonly known as Lou Gehrig’s disease. Running for Jim explores how the once competitive runner now faces the greatest challenge of his life and how he continues to inspire his athletes.

“I didn’t know if there was really a story there,” answered Jim, when asked how he felt about being the subject of a documentary. “That said, I’ve done a lot of things. I’ve lived in a way that I didn’t think was fascinating, although maybe it wasn’t typical. Evidently, my story tells a lot of people’s story.”

Jim grew up following his father on the California horse racing circuit during summers, which traveled from county fair to county fair. “As kids, we’d run along a track when there weren’t any horses,” he recalled. “We were always on our feet, running and being active.”

In high school and college (San Jose State, City College of San Francisco, Cal Berkeley) Jim ran the mile and 5000 meters. After college he added the 10,000 meters. “The Bay Area always had a thriving running community,” he said. “There were plenty of races to enter, and I was always in the top 20 finishers in the Bay to Breakers.”

When Jim was first diagnosed, he sought the advice of a physical therapist on how he could continue to keep active and was directed towards swimming. “I was never a very good swimmer, and I’d swim with a device on,” he said. “Eventually I became too weak to swim.”

Jim is now wheelchair bound but that doesn’t mean he isn’t mobile. Or that he’s stopped coaching. He has  a car that lifts his chair into place and has expanded his assistant coaches from one to three. The cross country season began the Monday before Labor Day and will continue through Thanksgiving weekend.

“I have a disease that robs me of vigor,” he said. “But coaching keeps me interested in the vigor of life.
The kids show their appreciation — and their involvement keeps me competitive.”

Proceeds from the screening of Running for Life will benefit the ALS Association GoldenWest Chapter to support ALS research and families in the Bay Area who are affected by ALS. A portion will also be donated to the Jim Tracy Special Needs Trust. The film will be presented at 7:15 pm; tickets can be purchased in advance online.