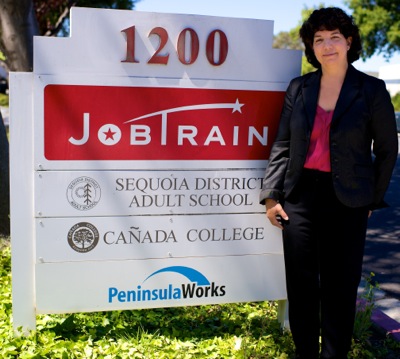 JobTrain Executive Director Nora Sobolov was only three days into her new position with we visited with her last week at the JobTrain facility in Menlo Park. But that didn’t mean she had no thoughts about the direction the vocational training and placement organization would be heading — or how she came to be involved in nonprofit leadership.

InMenlo: We realize this is the third day on the job, but any hints of where you want to lead JobTrain?

Nora: This place has tremendous resources and a lot of community support. My focus will be to complement existing programs and fill in the gaps. It begins with having a lot of conversations among stakeholders and employees. That doesn’t need to take a long time, but it does need to be done. People in the community are already talking to me about a need to expand youth programs.

InMenlo: In your conversation with the Board during the hiring process you must have had some conversations about future directions. Examples?

Nora: Of course. One thing that all nonprofits need to do now is look for alternative financing. This includes Pay For Success programs. This kind of social financing wasn’t available five years ago. If there is a program that you can run that saves the government money, a pool of investors is put together. But rather than compensating investors based on services delivered, it’s around a agreed upon outcomes.

InMenlo: You have a long history of working with or for the nonprofit sector. Why did you decide on this career path?

Nora: Much goes back to my father, who first worked as a garment cutter in New York, and, thanks to the city’s public university system, became a microbiologist. He’d speak to groups about making a better life for our children and our community. Social programs where his generation’s legacy to us.

For my part, I believe there are many ways the for-profit and non-profit sector can collaborate, working on better outcomes for everyone.

Nora: I lift weights. I used to workout at the same gym where the Canadian para-Olympic team trained. They were really inspirational!

Note: More information about JobTrain’s programs and how to get involved is available on the organization’s website.