For Eugene Robinson, it all boils down to art 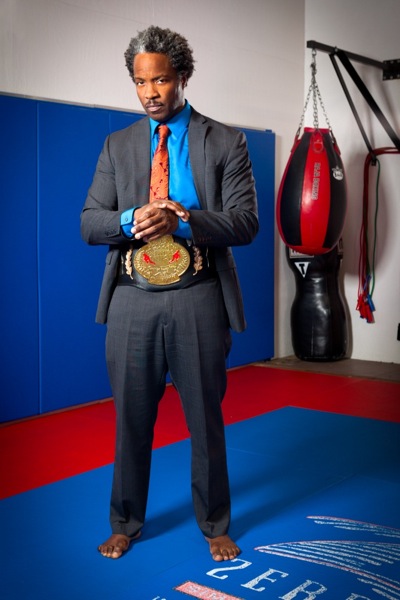 Some people are described as “comfortable in their skin.” Eugene Robinson appears to be comfortable in multiple skins, pursuing multiple vocations and avocations.

Novelist. Musician. Fighter. Journalist. Actor. Father. “I guess that’s right,” he replied, when it was suggested that “artist” might best convey the sum of his many parts.

“I like the use of that word,” he continued. “Whether it’s Brazilian Jiu Jitsu, the crafting of a song, writing books, or raising children, there’s artistry involved.”

What he isn’t is a marine biologist, which is what he came from Brooklyn to Stanford to study. “But I’d always been drawn to journalism,” he said. “I was about nine when I sent my first letter to Esquire and was publishing an occasional magazine by the time I was 18.”

Eugene has written a book, Fight

, about another of his passions, fighting, although, at 51, he sticks to a mixed martial arts called No-Gi Brazilian Jiu Jitsu, working out at the Leopoldo Serao gym. He took the champion belt (pictured in photo) at the Tachi Palace 2010 competition and produces the vlog Knuckle Up.

“I got hooked the first time I saw a Bruce Lee movie when I was 5,” he said. “I knew that was what I wanted to do. My parents were peace loving types who didn’t approve. I did get them to pay for karate and boxing at the local Boy’s Club.”

Eugene’s sports have mainly been one-on-one, although he did play rugby at Stanford. Writing is also a solitary pursuit. He’s also the author of a novel, A Long Slow Screw

, and is now Deputy Editor at Ozy (and just may be the only man in Silicon Valley to wear a coat and tie to work!).

“I’ve recently become a believer in collectivism,” he said. “Rugged individualism is sold as a grand achievement, but it comes from collective action.

“Though my sports are one-on-one, there is still a team behind me. My band Oxbow is about teamwork. And even with the novel, I’m now working with someone on translations. The only truly solitary art is sculpting and painting.”

Asked about final thoughts on fight competition, he replied: “It’s about the intensity of the experience. This type of fighting [Brazilian Jiu Jitsu] is extremely intimate. That scares people away. But it’s where all serious blood endeavors come down to, whether it’s love or war.”