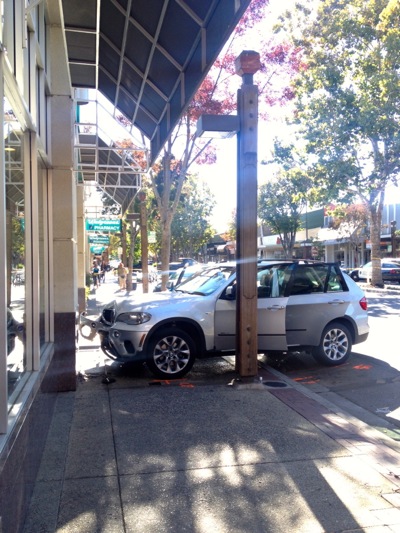 The Menlo Park Police Department has closed Santa Cruz Avenue in the eastbound direction in downtown Menlo Park, following a traffic incident where a car jumped the sidewalk in the direction of Walgreen’s drug store. MPPD issued this statement:

“Today (10/17/2013) at 2:17 pm, Menlo Park Police Officers responded to the 600 block of Santa Cruz Avenue on a call that a vehicle jumped a curb and pinned two juveniles against the wall in front of Walgreens. [The two children attend Oak Knoll School, according to Principal David Ackerman. One brother suffered a broken arm; the other has more compliated injuries.]

“Preliminary investigation does not show that the driver, a 90-year-old male, was under the influence of drugs or alcohol. The case is under investigation, and the eastbound lane of traffic on Santa Cruz Avenue will be closed in the 600 block due to the investigation.

“Please contact the Menlo Park Police Department at (650) 330-6300 if you witnessed or have information on this accident.”

Prayers and good thoughts for a full recovery.

We were rounding the corner onto Santa Cruz Ave when we heard children screaming in a way that wasn’t anything like a playground and adults yelling Oh my God Oh my God Oh my God. A horrific sound. Crowds running down to help, people coming out of stores. Still the screaming continued. We called 911 (as no doubt ten zillion other people did) and then suddenly after the police, firetrucks, and ambulances had taken over the street we sat down and began to weep.
Laura Steuer, MP resident since 1991