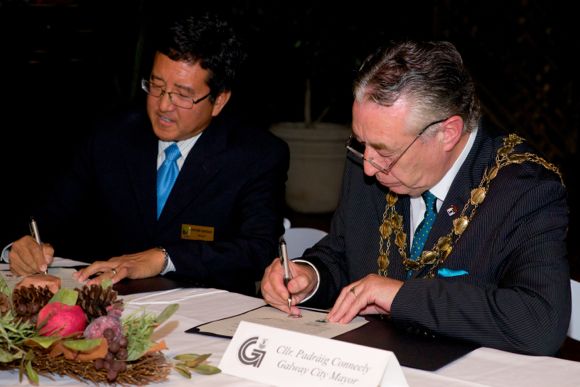 Almost exactly one-year ago Gerry Hanley came from his hometown of Menlo (or Menlough, the anglicized version of the Irish Gaelic Mionloch, which means “small lake”), now a section of Galway City, Ireland, to Menlo Park with a personal mission to establish a friendship relationship between the two cities.

His point of contact here was with the Menlo Park Historical Society, an organization that is well aware that in the early 1850s, when almost no one lived in this area, two immigrants from Ireland (at least one from Menlo), Dennis J. Oliver and Daniel C. McGlynn, along with their wives who were sisters, established a ranch on the west side of County Road (today El Camino Real), just north of the San Francisquito Creek. They erected a gate to their ranch embellished with the words “Menlo Park.” When the new San Francisco & San Jose Railroad came to this area in 1863, they named the local railroad station Menlo Park, taken from the nearby gate.

So was conceived today’s City of Menlo Park (although not incorporated until 1927). 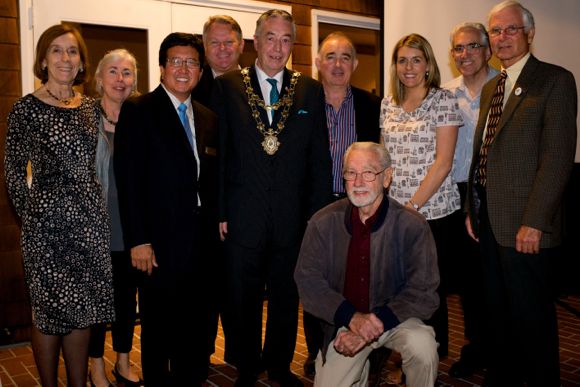 Now almost exactly one year after his first visit, Gerry returned bringing with him the Mayor of Galway, Pádraig Conneely, for the signing of a formal friendship agreement. Menlo Park Mayor Peter Ohtaki , members of the City staff, members of Two Menlos (the new local volunteer organization dedicated to carrying out this friendship agreement) as well as many of the public, gathered Thursday evening (October 17) at the Stanford Park Hotel for the signing of the agreement, which came immediately after the State of the City Address by Mayor Ohtaki.

Following his introduction by Mayor Ohtaki, Mayor Conneely expressed how very proud he is of Oliver and McGlynn and what they did. He then presented a lively overview of Galway City, which is on a bay on the west coast of Ireland. With a population of about 80,000, Galway City is a center for the arts, culture, tourism and industry (including the European Headquarters of Hewlett-Packard). In addition it is the home of the National Irish University Galway with its approximately 20,000 students. He closed by expressly inviting Mayor Ohtaki to visit Galway City.

Mayor Conneely and his party will be present Saturday, October 19th. at the 150th Anniversary Celebration of the railroad, which will in some respects duplicate the inaugural celebration held here on October 17, 1863. Saturday’s event will be held at the Menlo Park Depot (constructed in 1867) from 11:00 AM – 3:00 PM.