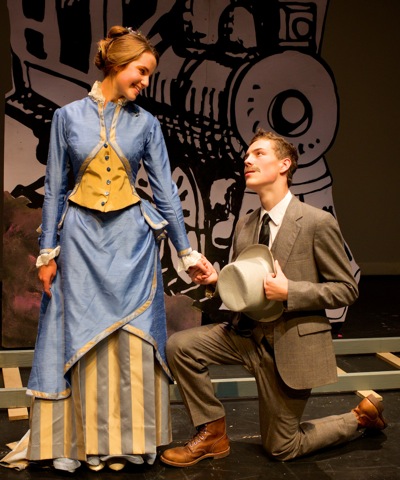 Lead actors Gray Perrone (pictured, left) and Chris Macrae (right), the hero and heroine of Love Rides the Rails (or Will the Mail Train Run Tonight?) share at least one thing in common. They’ve both been interested in acting their whole (young) lives.

“I did drama at Hillview and have always had an affinity for theater,” says Chris during a dress rehearsal for the Menlo-Atherton High School drama department production which opens tonight and runs for two weekends.

Gray says she’s been acting since she was five: “I’ve always liked being in front of an audience and telling stories. Being the leading lady is just great — I love it!”

The plot line of Love Rides the Rails by Morland Cary is good old-fashioned melodrama complete with songs, pantomime, great mustaches, and audience participation. When the villain, Simon Darkway, seeks to control the Walker Valley, Pine Bush & Pacific Railroad for his own evil purposes, he enlists his partner-in-crime, Dirk Sneath, and the sultry Carlotta Cortez for his scheme. Can the heroic Truman Pendennis (Chris), his trusty friend Harold Stanfast, and the angelic Prudence Hopewell (Gray) save the railroad from certain doom?  The play “screeches to the amazing climax when the hero is inescapably bound by the villains to the tracks of an oncoming train.”

Can’t wait to see another amazing Menlo Atherton High School show! And I hear there is a student discount tonight and they are giving out FREE fake mustaches! So much fun!