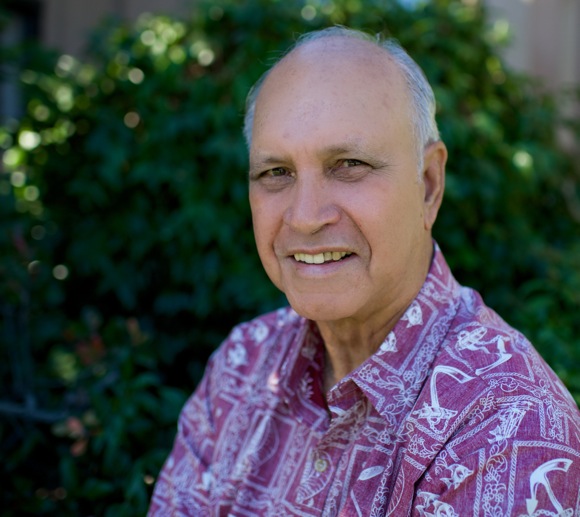 It’s not often that a Hawaiian oli (chant) echoes through the Menlo Park City Council Chambers. Let alone one uttered by a retired Santa Clara County Superior Court judge. But when it happens, it’s a sure sign that native Hawaiian author and part time Menlo Park resident Bill Fernandez is back in town.

On November 16, Bill will be visiting Menlo’s Council Chambers for a library talk on his latest book,  Kauai Kids in Peace and War. After his opening chant, Bill will be bringing the pages of his book (and childhood) to life though songs, anecdotes and colorful images. It’s a story that transports readers to an extraordinary place and time in history.

As Bill will tell you, few people have lived under military occupation in the United States. But as a half-Hawaiian boy growing up on the isolated island of Kaua’i in the 1930s-1940s, Bill experienced both peaceful simplicity and the harsh realities of war. “It was a time of innocence and living a stress free life, and then war comes, and all these soldiers came from the mainland to defend the island, and we began to learn there’s a bigger world out there,” he says. 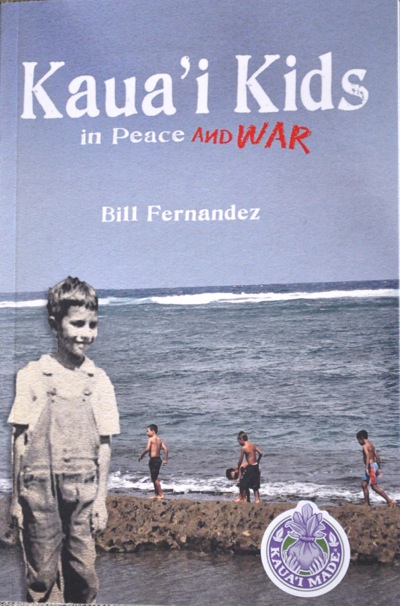 Kauai Kids in Peace and War spans from Bill’s early barefoot adventures in Kaua’i’s surf and sand to his memories of blackouts, martial law, rationing and racial prejudice. This is actually Bill’s second published memoir, following Rainbows Over Kapa’a, an interwoven account tracing both Hawaiian and Bill’s personal family history.

How Bill came to be an author is a story in itself. After graduating Hawaii’s Kamehameha High School, followed by undergrad and law degrees at Stanford University, Bill practiced law, served as a city council member and Mayor of Sunnyvale, and then as a Municipal and Superior Court judge.

After retiring in Sharon Hills in Menlo Park, Bill continued to work as a mediator, until his wife, Judie, insisted he really retire. With time on his hands, his childhood memories began to bubble up, and he decided they needed to be captured on the page. Admittedly, it was a struggle at first: “I had to really re-school myself about writing because when you’re a lawyer and a judge, you have ‘Whereas, wherefore, and according to the case of…’ which is not the way you write.”

About three years ago, Bill and Judie moved their primary residence to Kaua’i “to the beachfront house my mother bought with her pineapple cannery earnings.” According to Bill, they travel back and forth, averaging a half dozen trips to their Menlo Park home each year. “The Stanford football season has a lot to do with our schedule. We’ve been going to the games for 50-60 years,” Bill says.

Bill admits that his “retired” life as an author keeps him “busier than I ever was before.” But he takes great pleasure in sharing his childhood adventures through his books and talks. “So many visitors come to my island and all they want to do is rush north to find ‘Bali High’ and they leave without knowing anything about us. That’s the reason the books are written so that people here who love the islands or have visited the islands can learn more about the folks there and their story.”