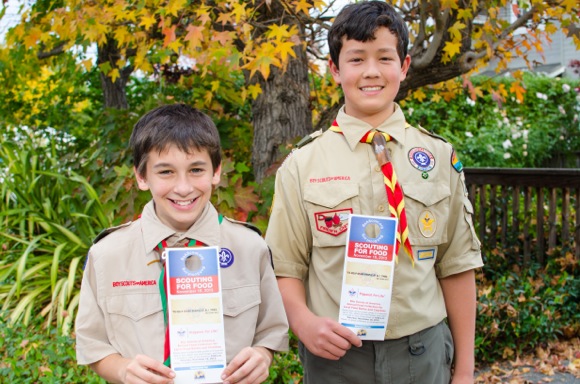 This week local Scouts from Troop 206 join thousands of Bay Area Scouts in “Scouting for Food”,  the single largest food drive in the Bay Area .

On Saturday, November 9, Scouts from Troop 206 distributed door hangers, asking Menlo Park residents to leave food items in bags by their front doors before 9:00 am on Saturday, November 16. The Scouts will return on that day to collect the donations, which will be taken to the Second Harvest Food Bank.

Troop 206 has consistently collected over one ton of food each year. Combined with other troops in Santa Clara and San Mateo Counties, Scouts from the Pacific Skyline Council collected 78,000 pounds of food last year.

If you did not receive a door hanger, but would like to contribute, donations can be dropped off at Trinity Church (330 Ravenswood Ave., Menlo Park) in the parking lot adjacent to Pine St. on Saturday, November 16 between 9:00 am and noon.