Avery Humphreys eyes a career in fashion with the launch of clothing line, Nameless USA 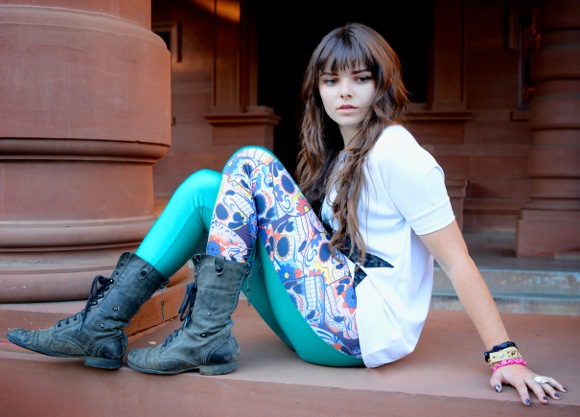 Sacred Heart Prep senior Avery Humphreys already knew a lot about persistence before she launched her clothing company Nameless USA™ last January. She competes in endurance riding with her Tennessee Walker horse, Ranger,  and has finished all 12 long distance rides they started. Now she’s putting together a game plan that will lead to equal success in her fashion career.

For one, she’s taking a gap year following graduation. “Putting together my first collection for Fall 2013, I learned some of the basics,” she said, seated near SHP’s portico. “Before then, sewing had been piece work for me. I’d select some fabric and make a dress. In my gap year, I want to gain a greater understanding various kinds of fabric.”

Once at college, she plans to focus more on business than design. “It’s great to know how to draw pretty pictures of clothes in a notebook,” she said. “But the thing that makes or breaks a designer is if she knows how to handle money. I want to learn how to put a business plan together and how the fashion industry works.”

Avery’s Fall collection is on view at Gitane on Santa Cruz Avenue in downtown Menlo Park and online. Her separates are the kind that are easy to dress up or down.

We asked Avery what designers inspired her. “Alexander McQueen for one,” she said. “I adore that his fashion is art. I love his message that woman are powerful.

“My other idol is Donatella Versace. She’s one of the few female designers in the industry. She took over the company at a difficult time. [Her brother, Versace founder Gianni, was murdered outside his Miami Beach home in 1997.] She did justice to her brother’s legacy while making it her own brand. And she’s managed to stay really strong as a woman in a male-dominated industry.”

Avery credits her friends with providing positive feedback and encouragement. “I thought I had some talent but realize I had a lot to learn and still have. I’m hoping my designs will evolve as my knowledge grows.”