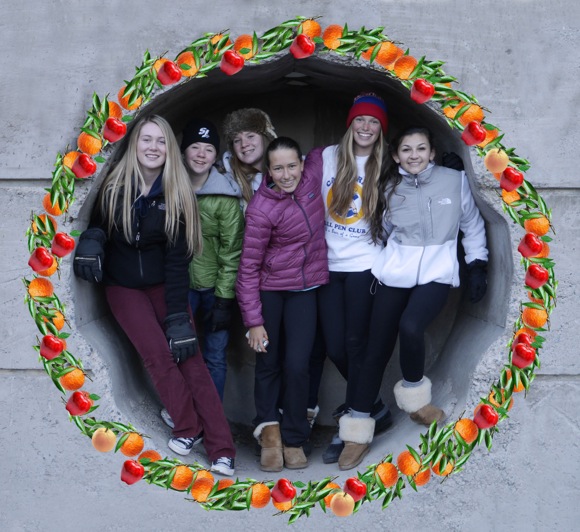 We’d stopped at “the best gas station in the world”, on our way to Lake Tahoe.  “It has the nicest staff, the cleanest restrooms, and it is just the best, period” — at least according to Grace Tully, one of the Mid-Peninsula National Charity League (NCL) girls from the class of 2017.

The group of six freshmen and two moms on an NCL expedition found snacks, and used the very clean restrooms.  Keri, the other mom, pointed out a good deal for a bag of oranges, so I picked the best and laid it on the counter joking with the clerk to guard it while we gathered our other purchases. We were laughing at funny greeting cards when a man asked if we could step aside so that he could pick the best bag of oranges.  “Hey, don’t try to take ours” I said with a smile, and he teased that there was no need to worry because he, in fact, had selected the absolute best bag.

Five minutes later the clerk came over to tell me that the man had bought our bag of oranges and left the store — he thought we needed to know. Laughing, we yelled out that he couldn’t take “ours” only to be told that the man had simply paid for ours, as a gift, a good deed.

I ran out and had the most pleasant exchange with our benefactor and his friends, who had filled their tank and were ready to leave in their truck loaded with motorbikes. In a quick gesture of thanks, I promised to make a donation with the $13 dollars saved by his kindness.

Our NCL group, now joined by another mom and three more freshmen, talked about the good deed and how we could pay-it-forward.  We decided to ask at least 13 of our friends to donate $13, or any multiple of $13, or add any number of zeros to $13.  We picked NV4Y, or New Voices for Youth because I knew they were in current need.

This organization has been around for 10 years at Menlo-Atherton High School, founded by a group of women from the League of Women Voters. To continue next semester at M-A, NV4Y must raise $15,000.  The League has turned to crowd-funding at Indiegogo to continue the program while allowing them time to apply for new grants.

Students in NV4Y work after-school with film-makers to learn how to express their ideas through short videos. The League encourages them to become civically engaged. Students have made videos about cliques at M-A and about teen parents. Right now, they are working on a video about sexual responsibility. While they make and sequence images, plan and film interviews, students practice thinking critically and gain confidence that will benefit them in school and in life.

We came up with apples and oranges as our donation slogan because apples remind us of learning and good habits, and we are paying the oranges forward. Please join us and consider donating $13 (or a multiple) or adding as many zeros to $13 as you like!  Happy Thanksgiving to all.

As a post script, I thought our readers would like to know that Keri will be stopping at the “best gas station in the world” today and she is bringing a printed copy of this InMenlo post. It will be a magical moment when the man who bought us the oranges, and is a regular customer at the store, sees this article and can appreciate how his act of kindness is being paid-forward, and spread so widely. Please share a link to this InMenlo post to at least 13 of your friends!!!!

Thanks for the great article and for all of your support! The NV4Y team appreciates you so much. When you forward the article, you may want to include the NV Indiegogo link, http://www.indiegogo.com/projects/new-voices-for-youth–2. Happy Thanksgiving and many thanks!