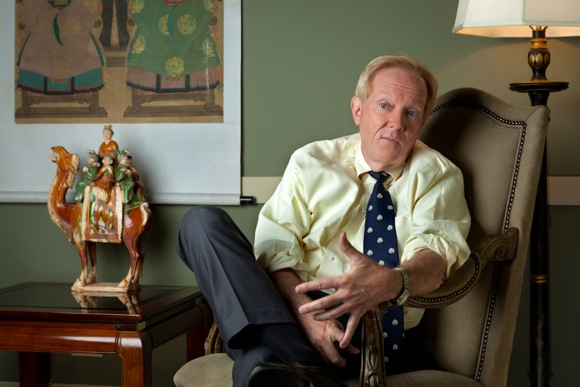 By the time he landed at Menlo College, first as Provost and now as President, Jim Kelly, who’d served at a number of large, regional Cal State campuses, was “ready to get back to basics.” Initially, that included campus landscaping.

“There weren’t any flowers on campus, except some roses,” he said. “I had an old Jaguar convertible and filled it up with flowers which I planted around the campus.

“I want to think that I made it a brighter place. And I’d like to think I’ve done the same thing with the faculty additions.”

Jim’s background includes business education, gerontology and social work,  but that he’s also a great story teller was evident from the moment we sat down in his well-appointed office, filled with art from his round-the-world travels.

Menlo College is rich in history, but with a book on the college coming out next year, we decided to focus our questions on what Menlo’s neighbors in Menlo Park and Atherton might not know about the their next door academic institution.

Jim talked about the racially diverse, international student body, two-thirds of whom live on campus, as does he. “There are 12 of us on the faculty who live on campus,” he said. “That means we see students at all times of the day and night. Even if they miss a class, they have to come out of their cave to eat. If I think someone is having a challenging time, I go knock on their door and ask them how we can help.”

Continuing on what its neighbors might not know, Jim talked about how the college has been the institution that has educated Saudi princes and generations of Hawaiians; the father of two alums wrote Mele Kalikimaka.

There’s also the college’s Bowman Library. “It includes a general collection, but the focus is on business,” he said. “The librarians are fabulous, and people from the community can get a library card.”

Asked what other hats he wears in addition to educator, he quipped that he’s also a garbage collector. “I walk the campus and pick up trash, although there’s very little of it.”

In many respects Jim is also “father.” “I don’t have any children of my own but I have 400 of them whom I live with.” he said. “At Menlo College we know who they are, where they are, and what they are up to. I treasure the everyday conversations and interactions with students.”

Lots of great information collected in this short piece on Dr. Kelly, who, if you ask me, is the best President Menlo has ever had, and I have served under all but the first three.

Menlo is a hidden treasure! It’s nice to see the press and endearing that President Kelly relates to the students in the way I remember faculty and staff relating to me. The deep caring for one another felt at Menlo is part of what makes the multicultural, engaging, dynamic student experience so special.