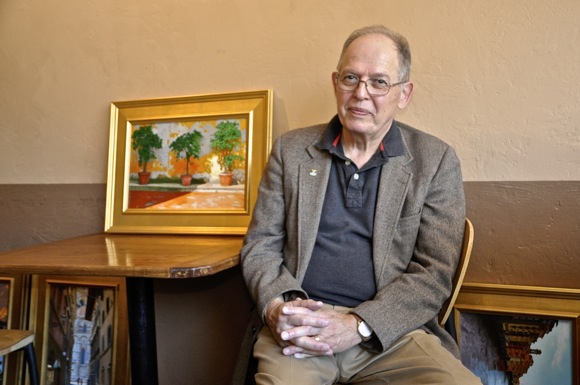 An old friend has returned to Menlo Park. An exhibit of paintings by Joseph Fuchs is on display at Cafe Zoe through January 5.  To locals, Joseph may be better known as “Mr. Fuchs,” an English teacher who taught at Menlo-Atherton High School for 33 years before retiring.

Even when teaching English, Joseph incorporated his knowledge of art to bring to life a wide variety of literature for his students. “If you had a scene in a book,” he said, “I’d ask the students how they would stage it, what the lighting would be. We could go on for an hour just talking about where their vision was, how they saw things.”

A seventh-generation Californian, Joseph became interested in art at the age of five. Sixty-five years later, he is a master of his craft. A perusal of his portfolio demonstrates an evolution in style, a refinement of technique, and a unique ability to consistently surprise his viewers and even himself.

Before an art show, he sometimes gets a chance to wander the premises and view his own work. “I won’t remember how I did a certain part of a painting,” he said.  “I say to myself, ‘How did I do that? How did I get that color? Could I have done that? I had a good idea then!’” 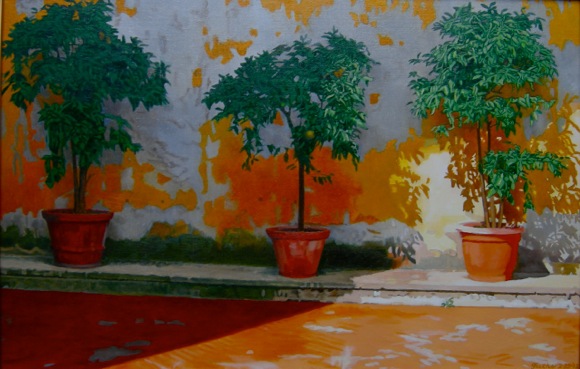 There is a distinct luxuriance of color in his artworks, and he achieves it by unconventional means. To produce the perfect color, he begins by painting the middle tone with an oil paint. He then uses thin layers of colored glazes, and like a wash, paints them over the oils.  This technique can expose even the slightest nuances of any given color.  Also, it provides his paintings with texture.

Although trained as a portrait painter, his current thematic obsession is the otherworldly scenery of Venice, Italy. This has been the case since 1982, when Joseph and his wife Jane visited Venice for the first time on a sabbatical — an originally lighthearted vacation that proved to be a life-changing experience.

“I’d been to other towns in Italy and they all had scooters and cars and Vespas and that type of thing,” he recalled. “But all these boats were bobbing up and down, and it was almost like it was to music — you know that very soft, up and down lull back and forth. It was just the most fascinating place I’ve ever been.”

At Cafe Zoe, two-thirds of the displayed pieces are Venetian while the other third are Tuscan. A reception for the artist will be held on December 7, from 1:00  to 3:00 pm. The artist will be present and eager to answer questions.

Viewer hint: Be sure to keep an eye out for a mysterious figure that recurs throughout his scenes of Venice, the playful trickster Pulcinella, a character adorned in all white, except for his black, beakish mask. Joseph himself has been spotted at Venice’s annual Carnival embellished in this costume.

I try to be objective about this article, Leah’s style and such. I have to say that even though I am Leah’s father, I can honestly say that this is a well-written piece that flows nicely and inspires curiosity. It makes us want to visit his paintings.
BTW. I graduated fro Menlo-Atherton in 1960. 🙂

Mr Fuchs!!!!!
omg! This man was famous!!! I graduated M-A in 1994 and first question you got asked about your english class is “are you in Fuchs’ class?” and it was because if you were you had to buckle down – this man was no Easy A!!! He was a tough cookie! But I loved him for that – you learned stuff. And having been a theater student – his staging I got into – and plan to write a book myself soon. An autobiography – I have been an Epileptic for over 39 years – I am getting surgery finally next year!! I would love to have Mr. Fuchs read it before I publish and give me critique! An Amazing man!

I had the pleasure of having Mr. Fuchs as my high school English teacher two years in a row! Colleen Flood is right, he was a “tough cookie.” I remember him calling my father whenever I was missing from class. He really cared about his students and taught us a lot. I had no idea he paints. If I’m in the Bay Area, on December 7th, I will definitely be there to check it out and hopefully catch up with Mr. Fuchs!

Tremendous teacher. I have one of his paintings in our dining room and use advice on writing he gave me in sophomore English to this day. Special human being.