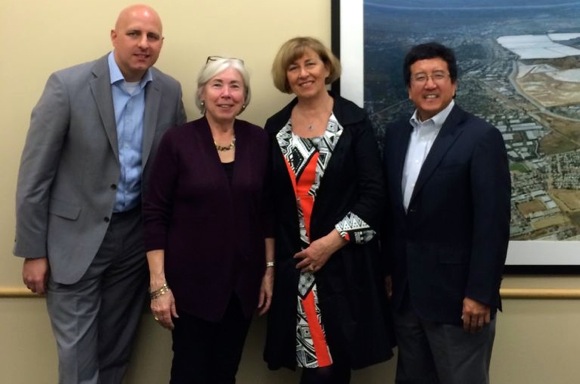 She was here on holiday to visit her son Niall, who lives in Menlo Park. At the suggestion of Galway City’s Mayor Pádraig Conneely, she contacted Councilman Ohtaki, which resulted in the informal friendship meeting. Joining them at City Hall was Fran Dehn, President of the Menlo Park Chamber of Commerce, and Jim Lewis.

Senator Keane is involved in environmental issues at home, so she readily agreed to the offer of a tour on Friday of the Shoreway Environmental Center in San Carlos, of which Menlo Park is a member. It was a pretty thorough tour, lasting two hours, led by Monica DeVincenzi, the Recycling, Outreach and Sustainability Manager for Shoreway.

Both Dehn and Lewis are on the Board of the Menlo Park Historical Association and co-chairs (along with the author) of Two Menlos, the local group organizing to support the recently signed Friendship Agreement between Menlo Park and Galway City. More information about Two Menlos is available on its website.