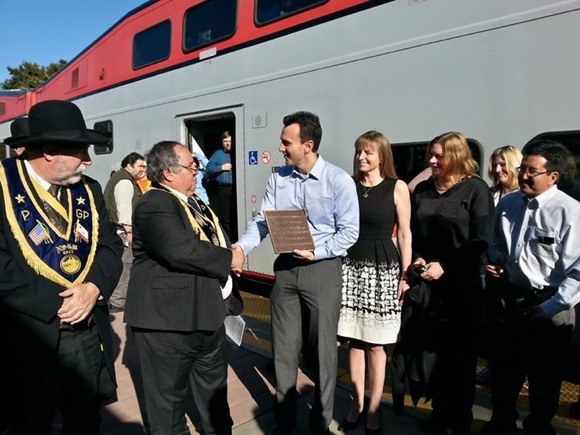 The Sons of the Golden West presented a plaque commemorating the Menlo Park Train Depot (1867) to Menlo Park Mayor Ray Mueller as other City Council members looked on this morning. The occasion was the celebration of the 150th anniversary of the completion of the railroad from Francisco to San Jose.

The Celebration Train stopped at each of the 6 historic depots on its way to Santa Clara. Each of these depots got a plaque. It’s not yet decided where around the depot the Menlo Park plaque will be permanently displayed. The train, loaded with celebrants, arrived at the Santa Clara station a little before 11 AM. At Santa Clara there were many displays by transportation groups of all sorts. The train museum was open. There were a couple music groups. About 12 PM a series of short talks were given moderated by JPB Chair Tom Nolan and led off by a surprise appearance of Rod Diridon.