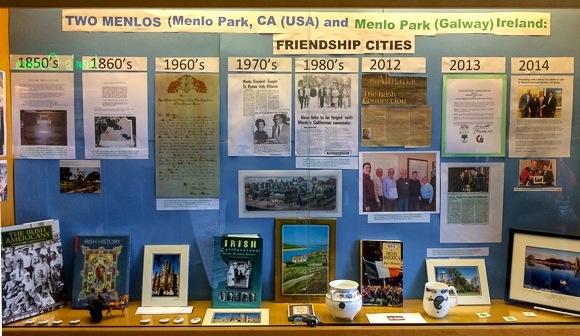 During the month of February, a display at the Menlo Park Library entrance will feature the recently signed Friendship Agreement between the City of Menlo Park and Galway City, Ireland.

As many are aware, Menlo Park is named for the very old Gaelic village of Mionloch (anglicized to Menlough and usually shortened to Menlo), which today is a townland within Galway City.

The name Menlo Park and the date 1854 was boldly imprinted on a gate at the entrance to a 1,700 acre ranch that two Irishmen from the Menlough area, Dennis Oliver and Daniel McGlynn, purchased from the Argüello family, owners of the much larger Rancho de las Pulgas. Oliver and McGlynn were most likely the first non-Californios to own property in today’s Menlo Park.

Their gate, which was modeled after the entrance gate to the Blake (sometimes known as Menlo) Castle, survived alongside County Road (now known as El Camino Real) until the ranch gate was demolished by an errant automobile in 1922. When the San Francisco and San Jose Railroad (now known as Caltrain) was being designed in the early 1860s, it was decided to put a station near the San Francisquito Creek in anticipation of future development in the area. Someone had seen the sign on the Menlo Park gate and gave the railroad station the same name. Around this station grew the town of Menlo Park, which in the 19th century included everything between Redwood City and the Creek and east of County Road to the San Francisco Bay.

Interest in forming a friendship relationship between Menlo Park and Galway City began about 50 years ago and in fact both City Councils at that time expressed the desire for an agreement. Subsequently Menlo Park Council Member and Mayor Peg Gunn made several unofficial visits to Galway City in the 1980s. On the last of these visits, Menlo, Ireland, resident Gerry Hanley was one of her hosts.

Having recently retired, Gerry came to Menlo Park in 2012 seeking to stimulate a formal agreement between the two cities. He received an enthusiastic response from the Menlo Park Historical Association and the Menlo Park City Council, which led to the formal signing of the Friendship Agreement on October 17, 2013, by the mayors of the two cities.

The left half of the library display, shown in two photos above, features various photographs, documents, books, newspaper clippings and other items, arranged chronologically by year. The right half of the library display, not shown above, contains additional information about Galway City and the Two Menlos, the latter being the emerging Menlo Park organization supporting the Friendship Agreement.

Interested in learning more? Visit the Two Menlos web site. If you’d like to be kept informed of what’s happening you may add your email address to theTwo Menlos email list (please refer to the Email List page on the web site).

Photo of display by Scott Loftesness