Pascaline Ujeneza’s courage brings her from Rwanda to Menlo College 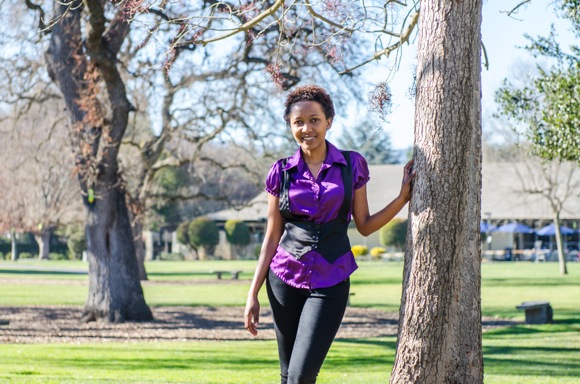 Courage — the ability and willingness to confront fear, pain, danger, uncertainty, or intimidation — is a word often used to describe the character of a leader. Pascaline Ujeneza’s story is about her courage and strength, and what it has taken for her to get where she is today.

A Management Information Systems (MIS) major at Menlo College, Pascaline transferred recently from San Francisco City College. How does she remember her childhood? “We were always hiding,” she said softly. During her young life, she has experienced profound tragedy and turmoil.

One of seven children, her dad, great-grandfather, most of her aunts and uncles, and her two best friends died in the Rwandan genocide twenty years ago. Her family was a blend of Hutu and Tutsi, two of the Rwandan factions that have been at odds since the mid-eighteenth century. Civil war flared in the 1990s followed by a genocide in 1994 in which extremists killed an estimated 1 million people. Today, many schools in Rwanda, such as Murambi Technical School, are memorial museums for the people who lost their lives in the war, their bodies having been dumped in mass graves.

The war disrupted school for Pascaline and her siblings, but eventually they all returned and finished. One sister became a nurse, another is a clinical psychologist in Rwanda, her self-employed brother works in telecommunications, and her youngest sister works in hospitality. Pascaline wasn’t happy with her limited choices for education in Rwanda. “The unrest in Rwanda caused me to move from my family, although it was very difficult to leave them behind,” she said. She emigrated to the United States in 2010.

Her journey was a long one. She flew from Rwanda to attend La Rouche College in Pittsburgh, Pennsylvania. After a short time, the cold winter drove her to Virginia, followed by North Carolina, Pennsylvania, and later, Ohio in search of a new beginning. Aided only by friends and acquaintances she had or met along the way, she struggled to find a life plan that she could call her own. “In Rwanda, friends are like family and we help each other,” she said.

Humid, hot summers followed the cold winters on the east coast, and she knew she needed to find a climate she could live in. After she received her permanent visa, she moved west and started attending San Francisco City College.

To earn money for tuition, Pascaline worked as a nurse assistant, and thought she would become a surgeon. Through her experience in taking care of others, she began to question if she was perhaps “too emotional” to face the human suffering involved in the medical profession.

In her search for a “smart school,” as she terms it, she found Menlo College and decided that a degree in business was the best launch for a career. “I was reading a newspaper in a doctor’s office when I saw an intriguing ad for Menlo College. It spoke to me,” she said. Later she noticed Menlo College in a college catalog and remembered the ad she had previously seen.

Pascaline is considering a career in computer engineering and possibly developing a small business. She hopes to intern at a Silicon Valley company such as Google, NASA, or GE. “I enjoy math and physics and now I have to put it all together with computers,” she said. “I feel like I’ve learned a lot.”

In addition to school, she is a lifestyle model for City Model Management in San Francisco, and interested in photography and video. Through classes and Menlo student life programming, such as the recent MLK Day movie night, she is beginning to make friends.

“I like the United States, because we have freedom of speech here which we don’t have in my country,” explained Pascaline. “Now that the troubles have subsided, all Rwandans are supposed to be the same, but opportunities are still scattered as the country rebuilds itself. Rwanda is a beautiful country, but I realize that my future is in the United States.”

An amazing story of courage and determination.