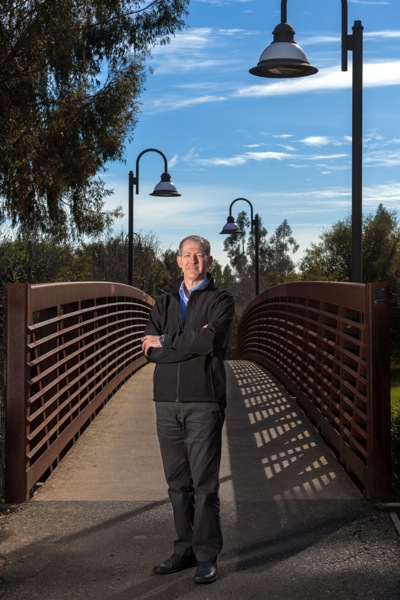 There is ongoing discussion about a new Pope-Chaucer bridge over San Francisquito Creek, with at least one group forming to bring attention to what effect it may have (Save the Oaks). We sat down with Len Materman, Executive Director of the San Francisquito Creek Joint Powers Authority, whose offices are tucked away in a nondescript building in downtown Menlo Park, to get a broader view of the Creek.

InMenlo: What is the Joint Powers Authority and what is its mandate?

Len: It’s a government agency that was formed 15 years ago following the largest flood of record in 1998, at least in terms of the number of properties [1,700] impacted. (The second largest occurred in 1955.)  Its mandate is to plan, design, and implement projects to enhance flood protection, ecosystems, recreation, and disaster response for a 50-square mile area.

Previously there had been years of public agencies and individuals working to make improvements regarding flood protection. But it’s impossible for an agency to be on just one side of the creek, hence the involvement of Menlo Park,  Palo Alto, and East Palo Alto along with the County of San Mateo and the Santa Clara Valley Water District.

In the first few years, efforts were focused on getting people to talk with each other about concerns and issues. Ten years ago, the agency became the local sponsor of an $8 million Army Corps of Engineers flood control feasibility study.

InMenlo: What areas of Menlo Park are most prone to flood risk due to the Creek overflowing?

Len: The unincorporated area near Weekend Acres is at risk. Then there is a gap between there and Middlefield Road — everything downstream from there is at risk. That’s not to say there aren’t other issues that face Menlo residents, such as erosion problems. 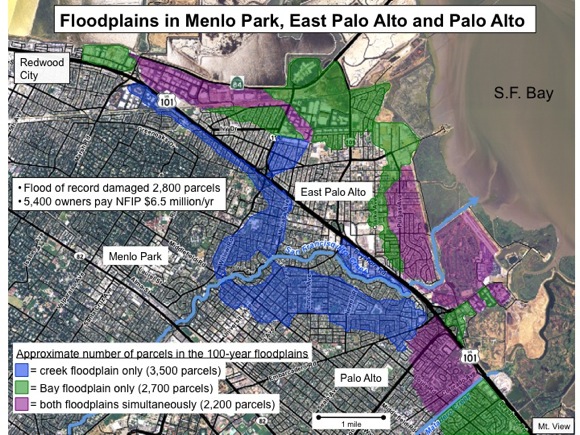 InMenlo: You’ve headed the agency since 2008. What progress have you seen?

Len: I’m not the best person to ask because I’m in the middle of it — I’m surrounded by weeds! I’m personally interested in how multiple jurisdictions can make decisions and move forward, and there’s been progress there as well on raising money. We’ve put together funding packages valued at $50 million, which includes Federal, state, and water district.

For years, the Creek has been viewed as divisive and a liability. We’re trying to change that, to make it a unifying force and an asset.

The challenge is there are enormous constraints — private property, endangered species, politics [elected officials from five agencies], as well as the multiple funding sources. But we are moving forward. Example: Because many properties are in both the Creek and San Francisco floodplains, we are leading an effort funded by the cities of Menlo Park and East Palo Alto, two state agencies, Facebook, and the Federal government to design tidal and Sea Level Rise protection of those cities. We’re also developing an innovative early warning system for residents and first responders during major storms.

Editor’s note: The public is invited to SFCJPA monthly board and community meetings; the schedule is available online.