Divisa Ensemble will perform at St. Bede’s in Menlo Park on Feb. 23 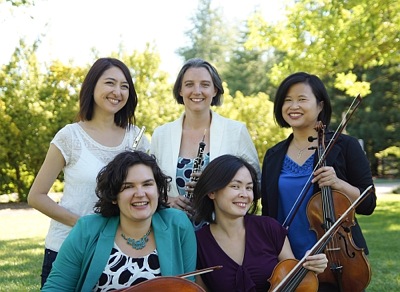 On Sunday, Feb. 23, the Divisa Ensemble will present a program of classical chamber music at St. Bede’s in Menlo Park as part of its Fifth Anniversary Season. The recital will feature music ranging from duos to quintets, with works by Ginastera, Schubert, Casterade, Koetsier, Bloomer-Deussen, and Hartmann.

The five-person ensemble is made up of flute (Tomiko Tsai), oboe (Adrienne Malley), violin (Emily Packard), viola (Stephanie Ng) and cello (Sara Styles). Explains the group on its website: “The name ‘Divisa Ensemble’ is derived from the musical term divisi which indicates that players are to divide into two or more separate sections. This method is reflected in our repertoire selections as we feature pieces with different combinations of instruments, as well as quintets with all five of us performing as one complete ensemble.”