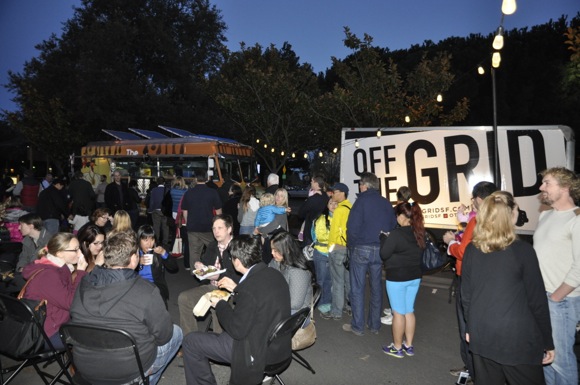 With the debut of Off the Grid at the Menlo Park Caltrain station on Wednesday night, Menlo Park residents can now choose to eat dinner from food trucks twice a week. The newest food truck event, which will be weekly, joins the long-standing Willows Market food truck night held on Mondays. 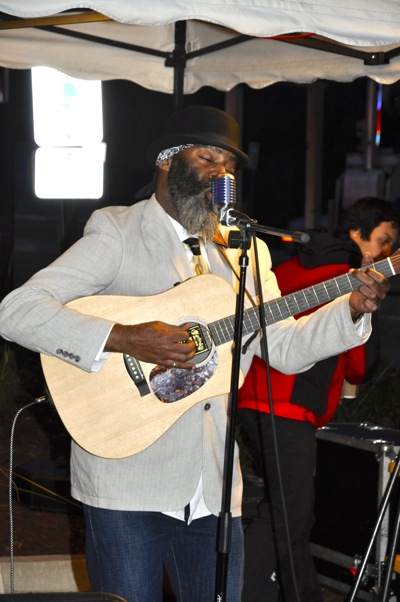 Off the Grid is a San Francisco-based company that opened in 2010 with three markets. According to its website, it now operates 23 weekly markets in the Bay Area using 150 vendors. In addition to food trucks, the company provides live music, chairs, and portable toilets at its various events.

Ten food trucks were represented at the Menlo Park Caltrain location. They included The Chairman, Little Green Cyclo, Sanguchon, Hiyaaa, Kara’s Cupcakes, Sam’s Chowder Mobile, Me So Hungry Too, Gold Rush Eatary,  Blendid, and The Waffle Roost (which had the longest lines when we stopped by).

Families with small children arrived early but chairs were still occupied by diners toward the end of the evening. That it was a balmy evening by February standards may well have increased the crowd turn out, as did the central location, drawing from Atherton as well.

Off the Grid will be bringing food trucks to the Caltrain station parking lot from 5:00 to 8:00 pm during the winter months, extending to 9:00 pm the rest of the year.

that was great and good idea for Menlo park