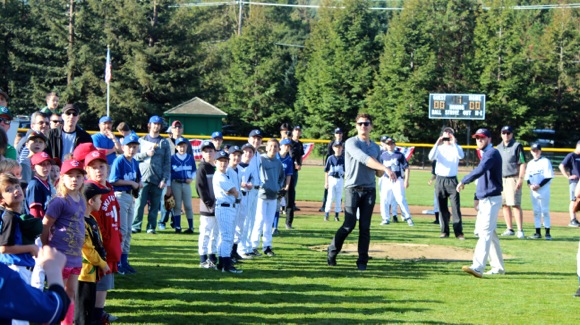 Alpine West Menlo Little League president Tim Goode emailed us this report about opening day yesterday: “[Former MLB player] Eric [Byrnes] was great. He told of his days playing on Ford Field for Morey’s and coach Tom Sutter, “who was the best coach I have ever had at any level” He reminded the kids the friends they make now are the friends they will have for life and the cherish these times. He reminded them to ignore those who doubt you and just keep playing. He stayed and signed autographs and spoke with any kid who came by. He brought MLB Network back packs to be distributed, too. Absolute class act.”

Byrnesie is a hometown boy! Good to see him back. I remember those days at Ford Field watching him nail the snack shack, round the bases with his lightning speed, and hit the balls onto Alpine Road. Oh . . and I think he hit a few windshields in his day 🙂

Let it be known I struck Byrnesie out in three pitches in ~1986.