Celebrate St. Patrick’s Day with tales of magic and blarney on March 22 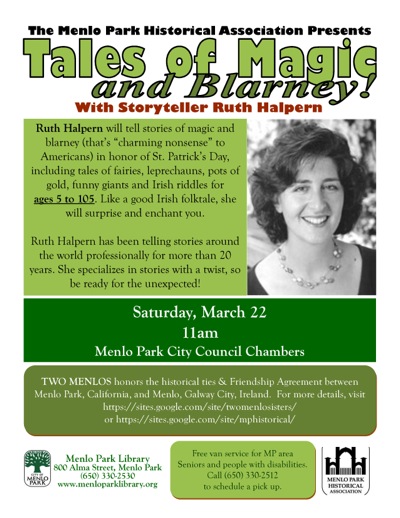 Today is the first St. Patrick’s Day to be celebrated following the signing of the historic friendship agreement between Menlo Park and Galway City (which includes the townland of Menlo) last October.

As part of this year’s celebration, the Menlo Park Library along with the Menlo Park Historical Association and TWO MENLOS is sponsoring an entertaining performance by professional storyteller Ruth Halpern. Ruth will tell stories of magic and blarney (that’s “charming nonsense” to Americans), including tales of fairies, leprechauns, pots of gold, funny giants and Irish riddles for ages 5 to 105.

Ruth has been telling stories around the world professionally for more than 20 years. She specializes in stories with a twist, so be ready for the unexpected!

The free story telling event takes place on  Saturday, March 22 at 11:00 am in the Menlo Park Council Chambers, located at 701 Laurel Street.