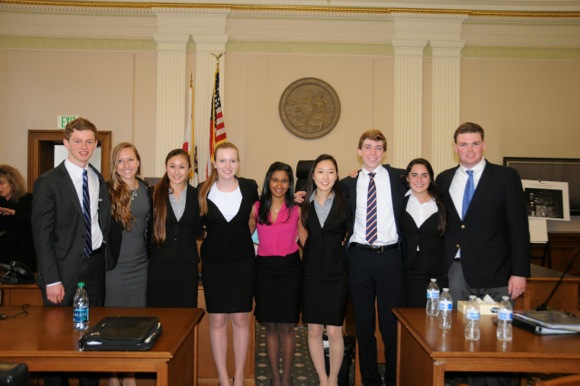 This year’s competition case, People v. Concha, concerns felony counts of second-degree murder and possession for sale of a controlled substance. The pretrial issue centers on the Fourth Amendment protection against unlawful search and seizure.

In the final round, Menlo’s victory was cemented when its prosecution team made a series of objections that overwhelmed the opposing defense team and disrupted the flow of its argument.

“Menlo’s victory was an amazing testament to the unity of the team, led by seniors who supported each other throughout the year. I’ve worked with high school mock trial teams for over 20 years, and this is the first time I’ve had a team reach this level,” said Dan Devitt, Menlo teacher and Mock Trial team supervisor.

Hello,
my name is mariah i was at the state compition! congrates saw your faces so cute anyways good luck in nationals i was kern county lol