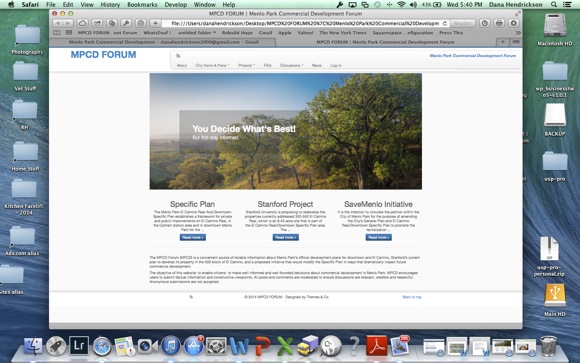 Menlo Park resident Dana Hendrickson sent InMenlo an email last week: “Spurred by the controversey surrounding the Stanford Project and uncivilized posturing in the local media, I have created an online forum where residents can share credible information and productively discuss the MP Specific Plan, the Stanford Project, and the effort to change both.”

He discusses what he is doing and why on the website’s About Us page, some of which follows below:

“The MPCD Forum (MPCD) is dedicated to Menlo Park residents who want to make well-founded and well-reasoned decisions about commercial development in our city. To that end, they value the truth, facts, and well-founded assumptions; distinguish between subjective and objective claims and arguments, and are willing to accept reasonable compromises. MPCD is maintained and moderated by Dana Hendrickson, a 30-year resident of central Menlo Park who shares the community’s strong interest in the future well-being of Menlo Park and its residents, businesses, service-providers, workers, guests and visitors.

“For several years I have been largely a distant observer of the development process for Menlo Park’s current Specific Plan which defines the commercial development projects that are likely to be approved without some form of exception. (Note: the exception process is well-defined.) I have also watched Stanford’s multi-year struggle to submit an approvable plan for developing a multi-use project on the 500 block of El Camino. And finally, I have witnessed the recent efforts of a group of Menlo Park residents organized as SaveMenlo that is dissatisfied with the Specific Plan, opposes Stanford’s current development plans, and wants to limit the substance and potential impact of Stanford’s project through proposed amendments to the Specific Plan.

“SaveMenlo has submitted a formal initiative proposal to the city and is now circulating a petition. If successful, an initiative would enable voters to register their support or opposition in November 2014. It is not clear what happens next whether the initiative either passed or failed.

“Balancing conflicting interests in a city is always difficult, and the Stanford Project has become the poster child for such a conflict in Menlo Park. While all residents want our city to make the best possible decisions they appear to differ widely in terms of personal values and beliefs about how Menlo Park can and should be, knowledge of important facts, assumptions about expected benefits and costs, and trust in our local government, Stanford, the business community and other residents.

“This website has two purposes. First, I need to be better informed about the issues surrounding the Specific Plan, Stanford Project, and SaveMenlo Initiative so I can make good decisions about them; I believe this website will help me gain the necessary knowledge. I also want to share what I learn with other residents. Ultimately, residents can disagree simply because they have different values, wants and expectations. However, all residents should feel responsible for making well-reasoned and well-founded decisions and committed to conducting themselves in a civil and honest manner.”

Good idea and its a shame that Menlo has decided that the past is not worth saving but moving on into the future with no historical significance. Menlo Park should not just be a place where money rules, it should be a place where a person can sit back and relax and enjoy a little of the past with a little of the future. I own a home that is over 116 years old and should be set aside for our future residents along with other historically significant properties. But I do not think this will happen and in 10 or 15 years the old once quiet city will be just a place to live in but with no historical values.

A message for Jon –
Sending you a note of gratitude on behalf of the Menlo Park Historical Assoc. [MPHA]. Your comments resonate with us.
Our office is located downstairs at the MP Library – check Google for details Tel: 650-330-2522.

Launched by a commercial developer, funded by Stanford?