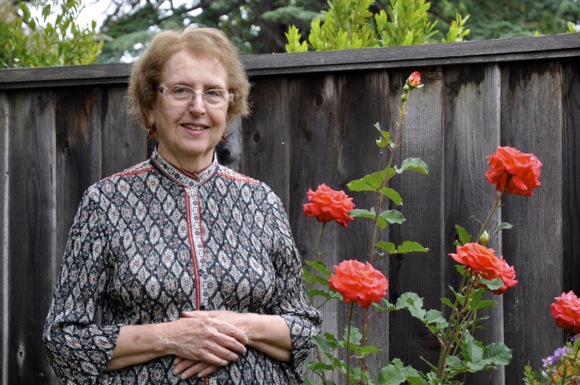 Two local authors of recently-published memoirs will be sharing their memories and discussing their books at a special program to be presented by the Menlo Park Library on May 3.

Eva Maiden (pictured), author of Decisions in the Dark: A Refugee Girl’s Journey, and K. Sophie Stallman, author of My War, My Life, will discuss their flights from Nazi occupation as youngsters, as well as their lives in their adopted country — the United States. The event will take place Saturday, May 3rd at 11:00 am at the Menlo Park City Council Chambers, located at 701 Laurel Street. The free program is sponsored by the Friends of the Menlo Park Library.

InMenlo profiled Sophie last August, so we took the opportunity to learn more from Eva, who lives in Menlo Park. Decisions in the Dark is her account of her family’s escape from Nazi-occupied Austria, only to become unwelcome refugees in Switzerland. The family arrived in the United States on the last passenger ship to leave Italy before the United States entered World War II.

In the book, she details her trials, tribulations, and small victories as a schoolgirl and teenager in New York City, facing challenges both from the outside as well as within her own family. “We arrived as penniless refugees,” she said. “Life was difficult. Both my parents were psychoanalysts, and it took some time before they could establish themselves in New York. Plus, my brother had severe emotional problems, partly as a result of the bad experiences he suffered in Europe.”

Before retiring, Eva worked as a school psychologist and as a Marriage & Family Therapist. “I chose that line of work as it was the family business,” she said. “I was fortunate to meet many industry leaders in the field of mental health.”

She also helped form the Holocaust survivor group in Palo Alto. “I’m the leader of a group in Berkeley now, but still attend the Palo Alto group, which is called Cafe by the Bay,” she said. “These groups have a social, educational and psychological component.”

Asked why she wrote her memoir, Eva replied, “I wanted people to know what happened in Austria, which was Hitler’s first conquest — even if it was with open arms by some. My family lived in Nazi-occupied Vienna for nine months. I have vivid memories and, for the book, also draw upon repeated family stories and history.

“I also wanted to work toward coming to terms with a very difficult childhood and family life. It’s helped me to write about my life.”