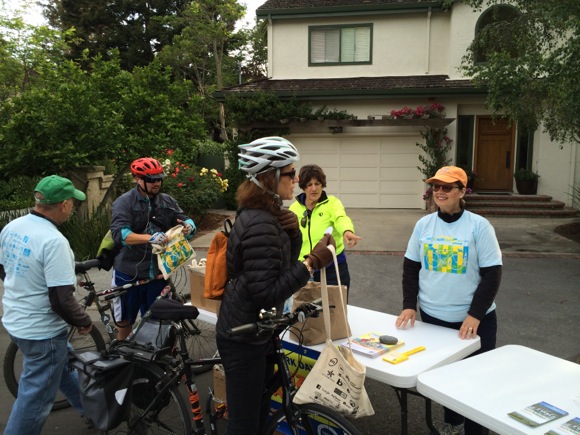 Today was the 20th anniversary of Bike to Work Day, and there were nine energizer stations scattered all over Menlo Park from far east to west during the morning commute between 7:00 and 9:00 am. Cyclists pedaling to work could stop by for refreshments and pick up a Bike to Work bag.

As has been our custom, when things were just getting underway, we stopped at the station located on San Mateo Drive near the bridge across San Francisquito Creek where perennial volunteers Bernadette and KC Callahan were on hand, this year joined by Menlo Park resident Katherine Nelson, who is a member of the Silicon Valley Bike Coalition. 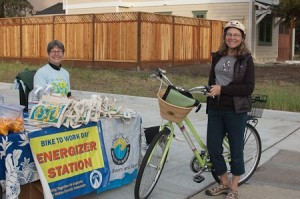 Later in the morning we heard from Gudrun Enger of Menlo Swim and Sport. They had sponsored a station at the corner of the Alameda and Valparaiso. She sent us a photo of cyclist Eva Bryer with volunteer Carolyn Heimke and a report: “We counted 168 folks who rode by. About 50 stopped for water, oranges and a bag!”

My husband and I have volunteered at the San Mateo Drive Bike Bridge for more years than we can remember and always enjoy the great turnout that we get. This year, the 20th Anniversary of Bike to Work Day, (2014) we had close to 200 cyclists stop between 7 a.m. and 9 a.m. for a bike (musette) bag, water, bagel, banana, reflectorized pant leg strap, “blinky” light to attach to your jacket and a Caltrain city identification tag for your bike. We also had close to another 100 cyclists “fly by” who were running late to work/school at nearby Stanford Univ./Hospitals. We love volunteering for this event and are avid cyclists as well. Every year we partner with the City of Menlo Park to make this event a huge success, which it always is. Rain or shine…we’ll see you next year!