Ann Eddington photographs the modern and the traditional in Myanmar

Photographing Myanmar, Menlo Park resident Ann Eddington saw hopefulness. She found the preservation of the country’s decaying temples whispered the days when Burma was a major world power. Amid the many vestiges of traditional Burmese culture, she found sparks of modernity — small details, like solar cells and a newfound enthusiasm for neon lights.

The community is invited to experience the country through a photograph exhibit: “From Burma to Myanmar- portrait of a country in transition” which runs through June 21 at The KCI Gallery on the lower level of the Krause Center for Innovation at Foothill College.

Eddington and 20 companions photographed the country for two weeks under the direction of Ron Herman, Foothill College Photography Professor. The group made its way from the capitol city of Yangon to the northern cities of Inle Lake and Mandalay, and west to Bagan. The country’s gold-leafed temples, Buddhist monks, and bustling markets appear en masse in photography of the country, but Eddington found herself to be cautious photographing the Burmese people.

“You’re there because it is different, but there’s a grey area between taking a photo because the subject is interesting and because the subject is other,” she says. “At least a generation has grown up knowing that it’s dangerous to talk to foreigners, so you felt like you didn’t want to offend them. They have a great personal dignity.” 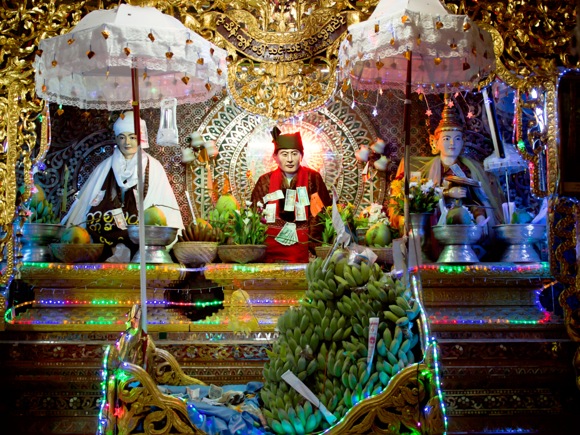 The group visited in the midst of new tourism age for the Burma. The country declared independence from Britain in 1948 and faced difficult years under military rule thereafter. In 1989, the military junta renamed the country “Myanmar” in order to distance the country from its colonial past. It took until 2010 for a general election to take place, and though military power has been formally dissolved, the 2008 constitution complicates the dynamic. The country is still plagued with civil and ethnic conflict, and even the name of the sovereign nation is contested. As the country has begun its new evolution, the world has turned an eye to the southeast.

The exhibit features photographs from 17 of the trip-goers in accordance with the theme of transition; the photos feature both traditional and modern subject matter. Eddington’s photos, titled “Neon Temple” and “Mandalay Temple at Sunrise”, explicitly juxtapose new and old. “Neon” depicts religious figures in a temple draped in neon lights, while “Mandalay” looks out over a fisherman on a lake in the reflection of a temple.

“When you first get to the country, it seems like the towns have existed for thousands of years — except for the motorbikes and cars. New green chutes of modernity are tender and tiny; they’re subtle. I liked the irony and contrast of the crazy LED lighting and old, Buddhist figures.”

A graphic designer by profession, Eddington found her interest in photography while taking a course related to website design. As a result, she signed up for Herman’s photography trip to Cuba, and has since taken to advancing her skill. She looks forward to photography travels again soon – perhaps to Ireland or Ethiopia.

“I like going places that aren’t part of global culture, places that are unique,” she says. “Places that don’t have box stores like Starbucks and Gap. I like to see how life was lived before the modern era.”

She describes her photographs of Burma as two phases of education – first in the moment, with a focus on the subject, and after the fact, as a trigger for a narrative.

“As a photographer, you choose great compositions — something that reveals honest expressions of people. Something that lights up your brain. You choose images where you think there’s something real, something iconic being revealed. The images have a story, a context, something simple being portrayed in a pleasing composition.”