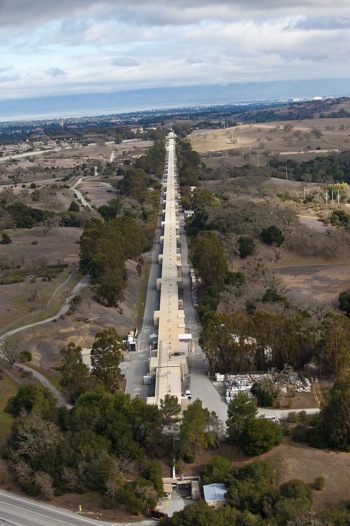 A fire alarm last night at the SLAC National Accelerator Laboratory in Menlo Park at 9:47 pm brought response from Menlo Park Fire Protection District Engine 6, which arrived to find heavy black smoke pouring from one of the structures.

The second alarm was staged at the front gate while first alarm crews worked with SLAC representatives and electrical engineers to shut down the area and de-energize the affected area. Once that was done, firefighters used several large mobile carbon dioxide extinguishing carts, stored on-site, to suppress the fire which appears to have started in a large electrical switching cabinet.

“Our crews have been well trained in the protocols and techniques needed to suppress and control fires at this facility,” said Fire Chief Harold Schapelhouman. “This was a text book case of isolating the source, de-energizing the unit, using on-site carbon dioxide extinguishers to cool the electrical cabinets, and putting the fire out, working hand-in0hand with SLAC personnel.”

No injuries were reported,  and the fire did not posse a threat to the community. Reports of very heavy black smoke affecting traffic on both directions of Highway 280 were eliminated once the area was de-energized. The fire was brought under control by 10:33 pm, and fire units were being released with the exception of several engine companies that worked to help overhaul the area and assist SLAC personnel until 11:56 pm.

“In the coming days our prevention staff will work with SLAC representatives to determine the exact cause of the fire, and we will review our operations,”  said Chief Schapelhouman. “Our prevention bureau meets monthly and I meet quarterly with SLAC representatives to discuss every incident at this site. They have an exceptional safety record and this event will not be taken lightly.”