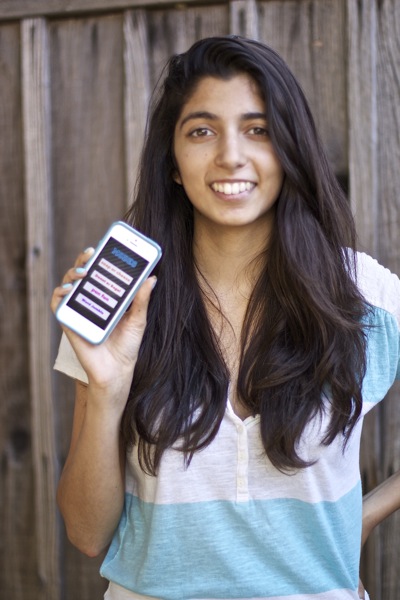 Simran Kashyap, a rising senior at Menlo-Atherton (M-A) High School, has taken her passion for software engineering to the next level and designed an iPhone gaming app, making her one of a steadily increasing number of Silicon Valley female youths who have demonstrated an interest in the technology industry.

The game, entitled “This or That” challenges users by asking them to categorize as many images as possible within a set period of time. This or That is inspired by the popular iPhone game “Llama Or Duck?!”, which features a single mode that displays an image that the user must identify as a llama or duck within a few seconds. Kashyap’s app,however, features various modes and themes, and what may seem like a simple game in concept has required many pages of code and hours of programming.

Simran programmed the app with the help of Palo Alto-based academy MakeGamesWithUs. She had some prior experience after completing the Advanced Placement (AP) computer science course at M-A, but the academy, she said, “helped by having all these [programmers] from different backgrounds to help me and give feedback and encouragement.”

For her, making an app was the “perfect way to practice coding… It is a real application of computer science, as opposed to [just] instruction.” She enjoyed the “hands-on” aspect of designing the game and finds that to be a far more valuable learning experience than lectures and other methods of traditional education.

Based on her experience, Simran describes the tech industry as accepting of and welcoming to prospective women engineers. Contrary to the common belief that the computer science field is unfriendly and even discriminatory towards women, she believes that is is a good fit and says that she never received different treatment because of her gender. From her point of view, the computer science gender gap that has been so prevalent in decades past is gradually closing with the new generation of software engineers.

Her main hope for her app, which is set to be released in early August, is simply “that at least a few will use my app and enjoy it.” The most important aspect to her has been the experience itself.

As for her own future, she hopes to obtain a Bachelor’s degree in computer science in college and pursue a career in the same field. “It might not be every little girl’s dream,” she said, “but it is mine.”