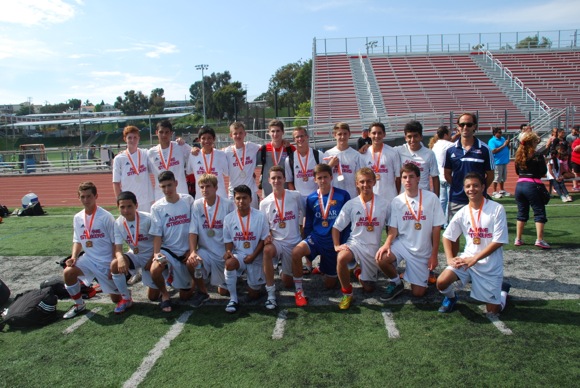 As the glow of the recent World Cup fades into the past, you can continue to see some high quality soccer right in our own backyard. The Alpine Striker’s Boys Under 17 soccer team is the oldest boys’ soccer team in the Alpine FC Club. At a time when many clubs break up due to age and other competing priorities, the core of this team has stayed intact for close to eight years and slowly and steadily ascended in the rankings and league levels.

The team recently competed in the Pyramid Cup in Southern California. The Pyramid Cup, which was held on July 26th and 27th is an elite level tournament centered around Long Beach. The host team was the Beach Football Club and their BU-17 team is ranked #2 in the state (on GotSoccer.com) and was the heavy favorite to win the tournament.

On Saturday, The Striker’s played SCV Magic in the first game and lost 3-0. In order to continue onto the next round on Sunday, the boys had to win the second game on Saturday. The result was a tight 1-0 victory against Riverside FC, on a goal by Josh Levitan . The reward was a semifinal game against the Beach FC host club, who had handily dispatched their two Saturday opponents.

In the Sunday morning’s match, the Striker’s jumped out to a quick 2-0 lead against a stunned Beach Club. The host team quickly came back with a goal to cut the deficit to 2-1 by half. Beach FC awoke in the second half with a steady barrage of pressure but goalies Christian Fioretti and Ari Eisner held off the pressure and Beach was not able to score. Alpine scored another goal late in the game on a corner kick to clinch a 3-1 victory. The Striker’s goals were by Sergio Lopez (2) and Josh Levitan. In the Sunday afternoon final, Alpine couldn’t quite rally and fell 3-2 to the DMS11 Academy, which is the 10th ranked team in Southern California.

The team is ably coached by Paul Moran. Paul has coached youth soccer since 2005. He played collegiately for Santa Clara University, Fresno State and Fresno Pacific and played three years professionally post-college and was drafted in 2007 to play for the Montreal Impact and then played for Minnesota Thunder of the NASL. He grew up in the Bay Area playing club and high school soccer at Bellarmine College Prep.

Under Paul’s steady leadership over the last 3 seasons (with a tip of the cap to previous coach Graham Hampton), the team has steady increased their quality of play, commitment and level of competition. The team has steadily moved from 70th to 40th and now is the 27th ranked team in Northern California. The second place finish in the Pyramid Cup will likely improve those rankings. Paul Moran said: “I’m very proud of our effort in the Pyramid Cup. Our finish clearly showed how this team can play when it’s focused and playing together”.

You might just notice the team playing or practicing at Rosotti’s or Portola Valley Town Center. If you want to watch some quality soccer, stop by and watch!

Great article, Steve! As a relative newcomer – dad (Ben Clock) and team treasurer for three years – I’ve watched the team grow from a local club to its watershed moment at the Pyramid Cup and well deserved ranking today. I give full credit to you and the parents for arranging your schedules, drive share and financial support; Jim Bujtor for the extra hours he puts in as Manager; and everyone for that extra push to get to the next level. It’s a privilege to be a part, I’m excited to see where the team will go next year. BTW I still have your folding chairs for the team from the trip, want them back??

Editorial correction: the sentence “Beach FC awoke in the second half with a steady barrage of pressure but goalies Christian Fioretti and Ari Eisner held off the pressure and Beach was not able to score” is incorrect. Whereas Christian Fioretti played in the first half of the game vs. Beach FC and preserved a lead going into halftime, it was Ari Eisner who played in goal in the second half and despite a steady barrage of pressure was able to make several critical saves and to record a 2nd half shut out.