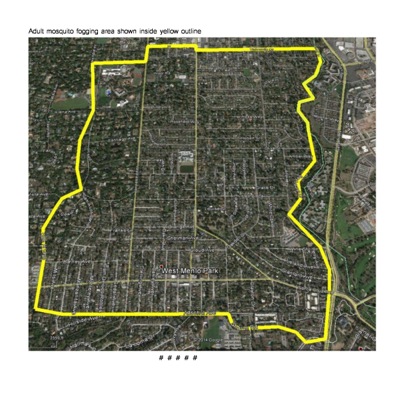 In response, the District will conduct truck-mounted mosquito fogging treatment around the detection site, in an effort to prevent human cases of WNV. Weather permitting, the mosquito fogging is scheduled for Monday, August 11, 2014, between 9:00 pm and 5:00 am in the area shown on the map.

Citizens of Menlo Park and neighboring communities have established a petition to oppose the August 11th fogging. We are asking for public forums to fully vet alternative, more effective options to target these mosquitos. Safe, healthier, and more effective options exist, and Menlo Park residents should have the right to analyze them fully with the relevant public agencies.

Sign now to stop the fogging scheduled for tomorrow and demand public forums to discuss mosquito control in our neighborhood!

Pesticides used in fogging are pervasive and long-lasting in soils, plants, and water supplies with long-term human health implications. We have established a petition to stop the scheduled fogging until public forums have been set up that engage Menlo Park residents on this matter, including healthier alternatives, and a robust cost-benefit analysis that accounts for the long-ranging health effects of pesticide fogging versus other forms of mosquito control. Please sign now!

Numerous scientific studies, including one by the Harvard School of Public Health, have shown that mosquito fogging is dangerous to human health and ineffective at controlling targeted mosquito populations. (See links below for details.) Given that one of the groups most vulnerable to pesticide fogging is children, it is especially disconcerting that this area includes many young families, public parks, and numerous public and private schools such as Oak Knoll Elementary, Hillview, Sacred Heart, various preschools (and is also across the street from Menlo School).

Do safe approaches to control West Nile Virus exist? Yes, they do, and Menlo Park residents (and parents of children who attend schools in this area) should have the right to fully vet those alternatives in public forums before our community is fogged.

The San Mateo Vector Control Agency and City of Menlo Park only notified the public on Friday, and we have about 24 hours to convince the Board of Supervisors, Vector Control Agency, and Menlo Park City Council and mayor that it is NOT OK to proceed with the scheduled fogging. The fogging must be canceled until our residents can engage on this topic. Public forums must be scheduled that engage Menlo Park residents, examine alternative approaches, and undertake a cost-benefit analysis that fully examines the long-ranging health effects of fogging versus other alternatives in a suburban area like Menlo Park.