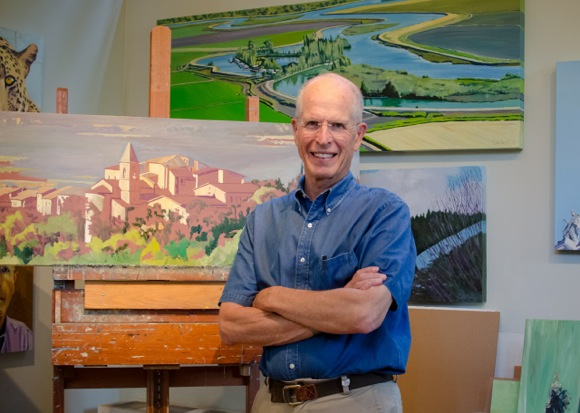 Woodside resident Jim Caldwell still considers architecture his “day job” but that doesn’t stop him from painting every morning from 7:00 to 8:30 in the studio that also serves as his office. “I equate it to being a good piano player who still needs to practice every day,” he says about his daily ritual.

Jim grew up in Atherton and remembers pedaling to Selby Lane School. He attended high school at Cate in Southern California where he won the senior art prize. “Going to Cate was pivotal for me,” he explains. “It offered small classes at a small school in a beautiful spot [Carpenteria]. It provided the foundation for me pursuing architecture.”

He went East to college at Williams, majoring in the history of art. Before enrolling at Yale’s architecture school, he took a year off, touring Europe drawing and painting and attending the Ecole des Beaux Arts in Paris. “I consider that period to be the beginning of my career as an artist,” he says. “I also realized I couldn’t support myself as an artist, hence pursuing architecture.”

Leaving his art behind for a number a years, he resumed it when he enrolled in a painting class taught by Richard Heidsiek at Canada College. “He really got me fired up again,” Jim says. “I started doing still lifes and landscapes, and then went out on my own as an architect. This space became my studio and office.” 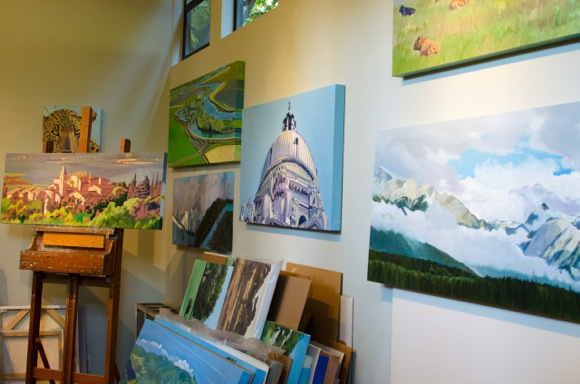 Today Jim’s paintings appear in over 350 private collections. He has had over 40 one-man shows and participated in thirty group shows. In addition to dividing his time between painting and residential architectural design, he teaches painting and drawing in the Stanford Continuing Studies Program.

In visiting with Jim, we noted that many of his paintings are horizontal. “That’s the way we see,” he explains. “That’s the reason movie screens are that shape.”

He’s decidedly not a plein air painter: “They have to make it up. I’m not good at making it up,” he says. Rather he paints from photographs, often taking many shots for what will result in one painting.

“When painting I usually go from back to front and usually spend a week on each work. I tell my students over and over, ‘Never be bored with your painting.’ After all of these years, I’m not.”