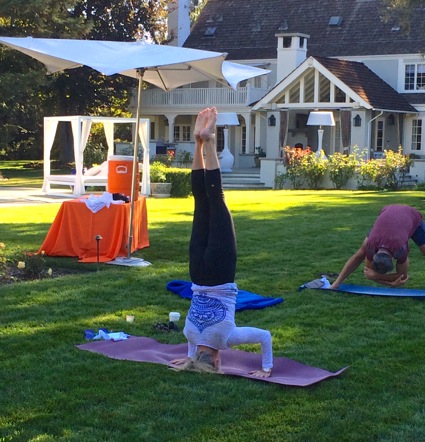 Update: Over 150 people participated in the ride or yoga, helping raise $44,000 to support prenatal and postpartum mental health services for mothers at the Ravenswood Family HealthCenter and provide car seats and other baby essentials.

The 6th annual Ravenswood Ride benefiting the Ravenswood Family Health Center was held today, giving cyclists a choice of a 50- or 30-mile route, starting from the Brody family home in Atherton.

New this year was two 90-minute yoga sessions taught by Brian Aganad, co-director of Avalon Yoga Center in Palo Alto. Both Julie and Jeff Brody participated in the first session, with Julie displaying her prowess at the head stand.

A new 38,000-square-foot, two story Ravenswood Family Health Center  located at Bay and Pulgas Roads in East Palo Alto will open in April 2015. The construction costs of the Center got a boost from a $5 million donation by Facebook founder Mark Zuckerberg and his wife, Dr. Priscilla Chan, in 2012.

The new center — replacing the temporary modular offices — will double Ravenswood’s service capacity from 11,000 to 22,000 patients per year, and support improved primary care services with 58 exam rooms and 13 behavioral health counseling rooms, as well as laboratory, imaging and mammography services, optometry exams and a pharmacy.

As Julie announced at the ride and yoga event today, additional funds are needed to meet the final fundraising goal. Donations can be made online.